1. explain the role of forest in maintaining the balance between oxygen and carbon dioxide in the atmosphere?

During photosynthesis, plants absorb carbon dioxide and convert it to carbon (stored as plant tissue) and oxygen. Forests therefore have an important ecological function in fixing and storing carbon from the atmosphere. Increasing concentrations of carbon dioxide in the atmosphere appears to be one of the factors leading to observed changes in the global climate, so that there is growing interest in the role of forests as a possible factor in mitigating climate change.

"Each year, as forests grow and increase their biomass, they absorb carbon from the atmosphere and store it in plant tissue. This process is known as carbon sequestration. Despite constant exchanges of carbon between forest biomass, soils, and the atmosphere, a large amount is always present in leaves and woody tissue, roots, and soil nutrients. This quantity of carbon is known as the carbon store. Carbon sequestration and storage slow the rate at which carbon dioxide accumulates in the atmosphere and mitigate global warming. Forests sequester and store more carbon than any other terrestrial ecosystem, and constitute an important natural defense against climate change."

plants produce oxygen by the process of photosynthes. they provide oxygen for animal respiration . therefore it maintains balance in nature .

They all are correct!!! 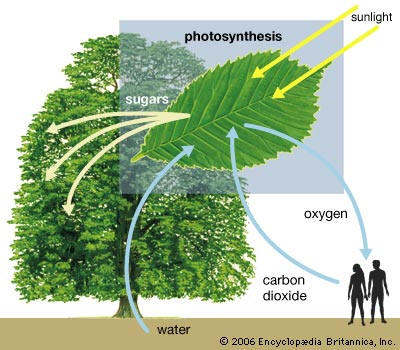 You can see the image