Advantages and disadvantages of WTO to the Indian economy..???

1 - An opportunity 2 India for trading with other member of countries.

2- Availability of foreign technology to India at a reduced cost.

1 - the rate of benefits 2 be the member of WTO 2 the developing countries is low.

2 - Many laws of WTO are unfavourable 2 the developing countries

state the focus of fdi

What are the merits and demerits of the wto against indian economy???

How investment in human capital accelerates the process of growth?

what is liberisation? describe any 4 effects of liberation on indian economy 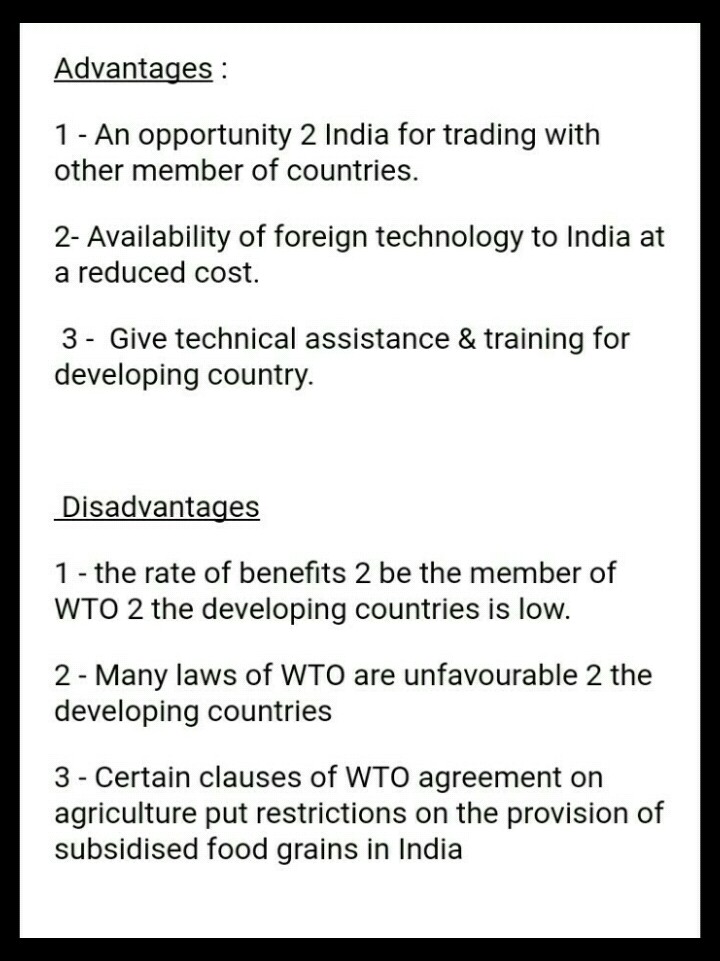 Advantages are as follows-: 1.Lower prices for consumers. Removing tariffs enables us to buy cheaper imports 2.Free trade encourages greater competitiveness. Through free trade, firms face a higher incentive to cut costs. For example, a domestic monopoly may now face competition from foreign firms. 3.The law of comparative advantage states that free trade will enable an increase in economic welfare. This is because countries can specialise in producing goods where they have a lower opportunity cost. 4.Economies of scale. By encouraging free trade, firms can specialise and produce a higher quantity. This enables more economies of scale, this is important for industries with high fixed costs, such as car and aeroplane manufacture. In new trade theory, it is this specialisation and exploitation of economies of scale that is most important factor in improving economic welfare

Disadvantages are as follows •However, the WTO has often been criticised for trade rules which are still unfavourable towards developing countries. Many developed countries went through a period of tariff protection; this enabled them to protect new, emerging domestic industries. Ha Joon Chang argues WTO trade rules are like 'pulling away the ladder they used themselves to climb up' (Kicking away the ladder at Amazon) •Free trade may prevent developing economies develop their infant industries. For example, if a developing economy was trying to diversify their economy to develop a new manufacturing industry, they may be unable to do it without some tariff protection. •WTO is being overshadowed by new TIPP trade deals. These deals are negotiated away from WTO and focuses mainly on US and EU. It excludes China, Russia, India, Brazil and South Africa. It threatens to diminish the global importance of WTO •Difficulty of making progress. WTO trade deals have been quite difficult to form consensus. Various rounds have taken many years to slowly progress. It results in countries seeking alternatives such as TIPP or local bilateral deals. •WTO trade deals still encompass a lot of protectionism in areas like agriculture. Protectionist tariffs which primarily benefit richer nations, such as the EU and US. •WTO has implemented strong defense of TRIPs ‘Trade Related Intellectual Property’ rights These allow firms to implement patents and copyrights. In areas, such as life-saving drugs, it has raised the price and made it less affordable for developing countries. •WTO has rules which favour multinationals. For example, 'most favoured nation' principle means countries should trade without discrimination. This has advantages but can mean developing countires cannot give preference to local contractors, but may have to choose foreign multinationals - whatever their history in repatriation of profit, investment in area.

explain the main policies adopted in India for the development of agriculture ineconomic
What are you looking for?