No, polyp cannot be said to be bisexual.
Polyps and medusa are the two body forms of coelenterates in which polyps are sessile, cylindrical body form whereas medusa are the free swimming umbrella like body forms. The small medusa are produced asexually by budding in the reproductive  polyps. Inside these polyps, medusae undergoes continuos cell division and grow in size. Later on, they detach from the parent polyp and become free swimming mature medusa, which are now ready to produce polyp sexually.  Hence, the process in which polyps produce medusa asexually and medusae form polyps sexually is known as metagenesis.

The following diagram shows the process of metagenesis in Obelia 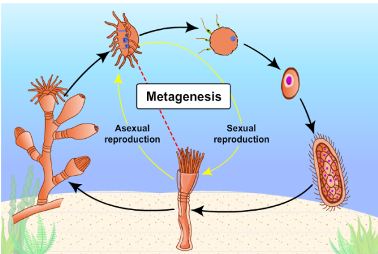