Compare the energy band digram of conductors, insulators and semiconductors.

The range of energies that an electron may possess in an atom is known as the energy band. 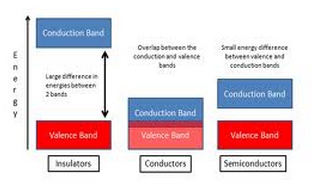 → The materials in which the condition band and valence bands are separeated by a wide energy gap (≈ 15 eV) as shown in figure.

→ A wide energy gap means that a large amount of energy is required, to free the electrons, by moving them from the valence band into the condition band ;

The materials in which conduction and valence bands overlap as shown in figure are called conductors.

→ The overlapping indicates a large number of electrons available for conduction.

→ Hence the application of a small amount of voltage results a large amount of current.

→ The materials, in which the conduction and valence bands are separated by a small energy gap (<3eV) are called semiconductors.

→ Silicon and germanium are the commonly used semiconductors.

→ A small energy gap means that a small amount of energy is required to free the elctrons by moving them from the valence band in to the conduction band.

→ The semiconductors behave like insulators at 00K, because no electrons are available in the conduction band.

→ If the temperature is further increased, more valence elctrons will acquire energy to jump into the conduction band.