Oogenesis is the process of producing the female gametes, the Ovum, from the primordial germ cells.

Stages of oogenesis in human females are as below:
Stage 1
Primordial germ cell undergoes mitosis to produce two Oogonia. These cells are all Diploid. It occurs in fetal life.
Stage 2
Each Oogonia also undergoes mitosis to produce two diploid Primary Oocytes. It occurs in fetal life.
Stage 3
Each Primary Oocyte starts to undergo meiosis I replicating their DNA, but they are arrested at the first Meiotic Prophase. It occurs in fetal life.
Stage 4
The meiotic block is removed by the onset of puberty and the first Luteinising Hormone surge. The primary oocyte completes its first meiotic division producing a Secondary oocyte and the first polar body. The Secondary Oocyte enters Meiosis II and is arrested at metaphase II. The secondary oocyte is diploid.The oocyte enlarges due to a inrease (x50) in cytoplasmic volume. The oocyte is now 100-150µm. Ovulation occurs at this stage once the first meiotic division has been completed and secondary oocyte formed within the follicle
Stage 5
The secondary oocyte completes meiosis II producing the mature gamete, the Ova, which is haploid.This stage only ocurs after fertilisation of the secondary oocyte by the sperm has occurred. 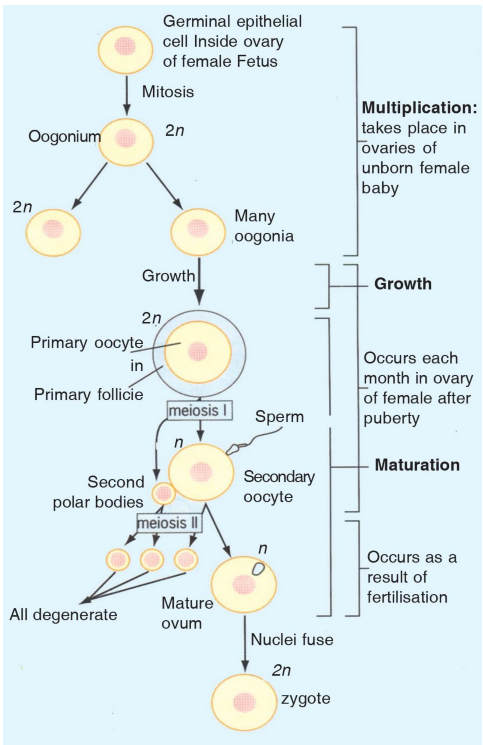