The transportation of food from the leaves to other parts of the plant occurs in the vascular tissue, namely the phloem. This process of transporting food is known as translocation.
The phloem consists of companion cells, sieve tubes, phloem parenchyma and fibres. The translocation of food occurs in the sieve tubes with the help of companion cells.
Translocation in the phloem is bidirectional and achieved by utilizing energy from ATP. For example, a food material such as sucrose is transported into the phloem tissue using ATP energy. As a result, the osmotic pressure in the tissue increases, causing the water to move into it. This pressure moves the material in the phloem to the tissues, which have less pressure. This is helpful in moving materials according to the requirements of the plant.


Ascent of Sap:
The upward movement of sap, i.e, water with dissolved inorganic ions, from the roots to the aerial parts of a plant through xylem is known as the ascent of sap . Many theories have been put forth to explain the above mechanism but the most accepted one is Cohesion- tension and transpiration pull theory given by Dixon and Jolly in 1894. It states that:
1. Adhesion: It is defined as the force due to which water molecules remain associated to the xylem elements.
2. Cohesion: The water molecules remain attached to each other in the xylem elements that provides surface tension and accounts for high capillarity.
Adhesion and cohesion provides high tensile strength, i.e. ability to resist a pulling force and high capillarity, i.e. ability to rise in thin capillaries. As a result, a continuous water column is maintained in the xylem that is pulled upward due to a force called transpiration pull.
3. Transpiration pull: When the cells of the leaves lose water through stomata by the process of transpiration, its adjoining cells absorb water and a continuous water column is formed. As a result of transpiration, a force is developed called as transpiration pull that can pull water to great heights.
The diagram is as follows: 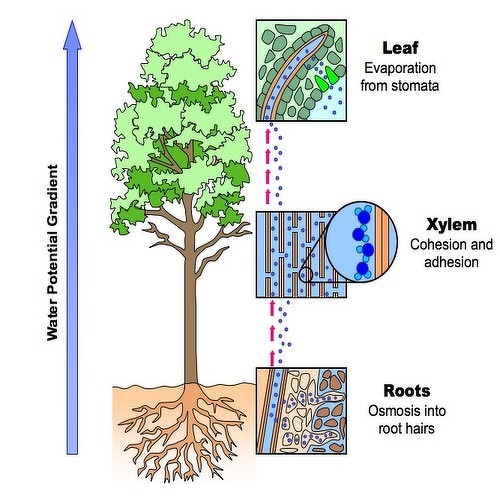