distinguish betwwen a plan , a sketch and a map

Sketch (maps): Roughly drawn maps which may be inaccurate but can be quickly created.

Maps: Should be accurate. Can be any scale. Features are drawn in their true position (within limitations of scale). Can be topographic; thematic; political etc.

spot observation and not to scale. Sometimes a rough

drawing is required of an area to tell where a particular

place is located with respect to other places

sketch is a drawing mainly based on memory and

on a flat surface according to a scale. But it is

impossible to flatten a round shape completely

map is a representation or

i think itz incomplete, but gud answer so far !

A plan is a drawing of a small area on a large scale. A map is detailed showing everything of the area. It is drawn according to a scale.  A sketch is a rough drawing mainly based on memory.
That helped me too;)

A plan is a drawing of a small area on a large scale. A map is detailed showing everything of the area. It is drawn according to a scale.  A sketch is a rough drawing mainly based on memory.

what is a map

Map is a piece of paper on which we represent the continent, ocean countries etc.

Map=A map is a pictorial reresentation of the whole earth or a  part of it on a flat surface.It is drawn on a small
scale.It cannot show too many details.It is large in size.
Sketch=A sketch is a rough drawing showing the relative position of a place with reference to a few other chosen
places or features.It is a rough drawing not drawn to scale.It shows only necessary or relevant details.It maybe 1 to 5
cm in size.
plan=A p​lan  is a drawingthat shows  layout of a small area.It is drawn on a large scale.It shows accurate details.It is small in size.

the answer was in my text bk , hoe it would be helful for you.

Map =a map is a representation or a drawing of the earth surface or apart of it drawn on a flat surface .

Plan is a drawing on a large scale

Plan
A plan is an accurate drawing

a plane is an accurate drawing of a place or small area. It indicate a very small Area on the large scale .

Sketches is a rough drawing of small area or a place or area it is not drawn to scale .

Map are representations of the Earth surface on a flat surface like paper they are made by cartographers there are three types of maths physical ,political and thematic 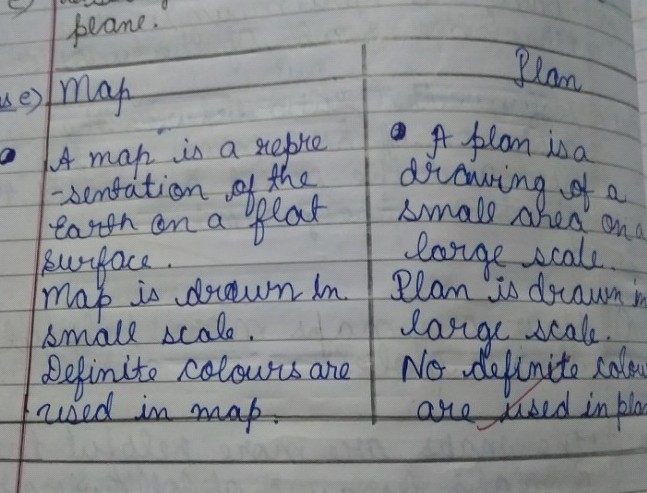 Sketch means _ a rough layout of an area

A plan is a accurate map of small area
A sketch is a roug map without a scale
A map is drawing of Earth's big part in a small piece of paper using different signs,symbols and colours

it is used for seeing the any kind of our country A)A map is a visual representation of an area—a symbolic depiction highlighting relationships between elements of that space such as objects, regions, and themes.

Plans are a set of two-dimensional diagrams or drawings used to describe a place or object, or to communicate building or fabrication instructions. Usually plans are drawn or printed on paper, but they can take the form of a digital file.


(b) Although most commonly used to depict geography, maps may represent any space, real or imagined, without regard to context or scale; e.g. Brain mapping, DNA mapping, and extra-terrestrial mapping.

Plans are often for technical purposes such as architecture, engineering, or planning. Their purpose in these disciplines is to accurately and unambiguously capture all the geometric features of a site, building, product or component. Plans can also be for presentation or orientation purposes, and as such are often less detailed versions of the former. The end goal of plans is either to portray an existing place or object, or to convey enough information to allow a builder or manufacturer to realize a design.

(c)Many but not all maps are drawn to a scale, allowing the reader to infer the actual sizes of, and distances between, depicted objects. A larger scale shows more detail, thus requiring a larger map to show the same area.

(d)To communicate spatial information effectively, features such as rivers, lakes, and cities need to be labeled. Over centuries cartographers have developed the art of placing names on even the densest of maps. Text placement or name placement can get mathematically very complex as the number of labels and map density increases. Therefore, text placement is time-consuming and labor-intensive, so cartographers and GIS users have developed automatic label placement to ease this process


Their's a big difference between a map and a sketch. A sketch is just an imaginary image of a specific place. It is usually used when someone ask for the location of a certain place or area. On the other hand, a map is used mainly in Geographical study, where you can recognize important geographical facts for a certain country. for example, in United States, with the map we can easilly know some geographical facts about united States, its capital city, major cities and the highest and lowest peak. Map is common for us. In school, office, and even in some homes, there's a map.