Maria Sharapova was born 19 april 1987. Maria Sharapova's parents, Yuri and Yelena, are from Gomel , Belarus. When Sharapova was two, the family moved to Sochi. The Sharapovs (Maria uses the feminine Sharapova) settled for a while in the Black Sea town of Sochi, known then as a resort village and home of Russian tennis light, Yevgeny Kafelnikov. Yuri had been an engineer in Nyagan. But as the family bounced from on home to the next, he did anything he could just to keep them together. By the time Maria was six, local tennis coaches encouraged Yuri to take her to Moscow to be considered for the Russian Tennis Federation. There, she wowed RTF head coach Yuri Udkin, who felt she was the best Maria Sharapova he had ever seen.
But things were not so simple in Russia, where the old order was changing. The Russian government had increased its tennis development program after the sport had gained Olympic status in the early 1980s. But even though ample funding was available, Marias parents followed the advice of Martina Navratilova, who believed that the U.S. would be the best place for the youngster to receive her training. The Sharapovs had met Navratilova during an exhibition in Moscow. The tennis legend was happy to offer her assistance.

By age 11, Maria was splitting her time between IMG, her home just outside Tampa, and the Los Angeles courts of Robert Lansdorp, whom she took on as her primary coach. A year later, Yuri began to get impatient. At one point, Bollettieri had to explain to him that rules prevented the 12-year-old from competing as a professional.
Sharapova first gained attention on the tennis scene in November 2000, when she won the Eddie Herr International Junior Tennis Championships in the girls' 16 division at the age of just 13. She was then given a special award, the Rising Star Award, which is awarded only to players of exceptional promise. She made her professional debut in 2001, and played her first WTA tournament at the Pacific Life Open in 2002, winning a match before losing to Monica Seles. Due to restrictions on how many professional events she could play, Sharapova went to hone her game in junior tournaments, where she reached the finals of the Australian Open and Wimbledon in 2002. She was the youngest girl ever to reach the final of the Australian Open junior championship at 14 years and 9 months.
From 2003, Sharapova played a full season, and made a rapid climb into the top 50 by the end of the year. She made her debuts at both the Australian Open and the French Open, but failed to win a match in either. It was not until the grass season that she began to fulfill her promise, beating a top-20 player for the first time and reaching her first semifinal at the WTA level. Then, as a wildcard at Wimbledon, she defeated 11th seed Jelena Dokić to reach the fourth round, where she lost in three sets to Svetlana Kuznetsova.By the end of September, Sharapova had already captured her first WTA title at a smaller event, the Japan Open Tennis Championships, before winning her second in her final tournament of the season, the Bell Challenge. To cap off her first full season as a professional, she was awarded the WTA Newcomer of the Year honor.
Back in Melbourne to begin 2004, Maria ran into problems at the Australia Open. She pulled out of the doubles with a leg injury, hoping to gut it out in the singles draw. But Anastasia Myskina sent her packing in the third round.
In February, Maria faltered again, at the Pan Pacific in Tokyo. After a first-round victory, she fell to Daniella Hantuchova. The news was better two weeks later, when Maria moved into the Top 25. Playing in Memphis, she reached the semis in singles, before getting ousted by eventual champion Vera Zvonareva. The loss was bittersweet, because Zvonareva was a friend, and the two were also paired in doubles. They came up short, however, in the final.
In October, Sharapova defeated Venus Williams en route to making the final of a Tier I event for the first time at the Zurich Open, losing in the final to Alicia Molik. She then made her debut at the year-ending WTA Tour Championships. There, she won two of her three round-robin matches (including a win over US Open champion Svetlana Kuznetsova) in order to advance to the semifinals, where she defeated Myskina. In the final, she defeated Serena Williams, 46, 62, 64, after trailing 40 in the final set.

Sharapova started the year at the Australian Open, where she defeated fifth seed Svetlana Kuznetsova to reach the second Grand Slam semifinal of her career. Sharapova held match points in the third set of her semifinal match, before losing to eventual champion Serena Williams. In February, Sharapova won back-to-back tournaments, the Toray Pan Pacific Open and the Qatar Total Open, allowing her to reach the top 3 in the world rankings for the first time. As the top seed at the US Open, Sharapova lost in the semifinals to Kim Clijsters, meaning she had lost to the eventual champion in every Grand Slam of the season. However, she once again leapfrogged Davenport to take the worldno. 1 ranking on September 12, 2005.

Sharapova started 2006 by losing in the semifinals of the Australian Open in three sets to Henin,also losing a rematch several weeks later at the Dubai Tennis Championships, having defeated former world no. 1 Martina Hingis and world no. 3 Lindsay Davenport in earlier rounds of the tournament. Sharapova claimed her first title in nine months at the Tier I tournament in Indian Wells, defeating Hingis in the semifinals and Elena Dementieva in the final. The following fortnight, she reached the final in Miami before losing to KuznetsovaNamed #19 in FHM's "100 Sexiest Women in the World 2005" special supplement. (2005)

Very close friends with fellow tennis player Maria Kirilenko.
Was named one of the 50 Most Beautiful People by People Magazine in 2005.
She defeated world #1 'Amelie Mauresmo' 6-0, 4-6, 6-0 in the semifinals and world #2 Justine Henin 6-4, 6-4 in the final of the 2006 US Open to win the title and $1.7 million in prize money.
Named #8 in FHM magazine's "100 Sexiest Women in the World 2006" supplement. (2006).
Ranked #17 on the Maxim magazine Hot 100 of 2007 list.
In 2007, Forbes Magazine estimated her earnings for the year at $23 million.
Wears a size 10 shoe.
October 2009, won the "Pan Pacific Open" in Tokyo.
Sharapova has lived in the United States since moving there at the age of seven. She has a residence in Manhattan Beach, California and in Netanya, Israel.
Sharapova lists fashion, movies, music and reading the Sherlock Holmes and Pippi Longstocking series as among her off-court interests, while she has also talked in the past about how she takes hip-hop dance classes.She has a Pomeranian named Dolce,[ which means "sweet" in Italian, and is also a stamp collector with a "huge collection" compiled since she was a child.
Sharapova is engaged to Slovenian professional basketball player Sasha Vujačić (Saša Vujačič, Саша Вујачић), who plays for the Anadolu Efes S.K. in Istanbul, Turkey.The two have been dating since 2009.
At the 2004 US Open, Sharapova, along with several other Russian female tennis players, wore a black ribbon in observance of the tragedy after the Beslan school hostage crisis, which took place only days before.In 2005, she donated around US$50,000 to those affected by the crisis. On February 14, 2007, Sharapova was appointed a Goodwill Ambassador for the United Nations Development Programme (UNDP) and donated US$210,000 to UNDP Chernobyl-recovery projects. She stated at the time that she was planning to travel back to the area after Wimbledon in 2008, though it didn't happen as she had to travel back to the US because of shoulder injury. She fulfilled the trip in late June early July 2010.
In addition, with Angela Haynes, Maria Kirilenko, Nicole Vaidišová, Rennae Stubbs, Governor Jeb Bush and Jennifer Capriati, Sharapova participated in an exhibition in Tampa in December 2004, raising money for the Florida Hurricane Relief Fund.
In July 2008, Sharapova sent a message on DVD to the memorial service of Emily Bailes, who had performed the coin toss ahead of the 2004 Wimbledon final that Sharapova had gone on to win.
Sharapova has helped to promote the 2014 Winter Olympics in Sochi, Russia.
In 2011, Sharapova was named in Forbes Celebrity 100. This lists her as one of the top 100 most powerful celebrities of the year.
Sharapova has made varying remarks on how long she intends to maintain her tennis career. Following the retirement of 25-year-old Justine Henin in 2008, Sharapova said, "If I was 25 and I'd won so many Grand Slams, I'd quit too." In an interview after the 2008 Australian Open, she balked at the idea of playing for another ten years, saying that she hoped to have a "nice husband and a few kids" by then.
However in an interview before her 2012 Australian Open semi-final, Sharapova changed her stance, claiming she intended to continue playing tennis for as long as she enjoyed playing the game. Sharapova stated "I'm sure when I was 17 years old and someone said, you'll be playing for another eight years, it would be like, you're not going to see me at a press conference at 25 years old. But years go on. I missed a year in my career I didn't play that year. I've said this, just before the tournament, a few weeks before, I woke up and I was just so happy to be going back on the court. I felt so fresh, full of energy, just with a really good perspective. Times change, obviously. I see myself playing this sport for many more years because it's something that gives me the most pleasure in my life. I think it helps when you know you're good at something, and you can always improve it. It obviously helps with the encouragement."
View Full Answer

This is the summary and character sketch of the chapter reach for the top.. 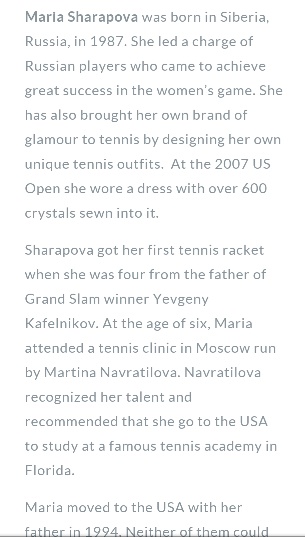 Characteristic on Maria Sharapova in 300 words

Plzz
What are you looking for?