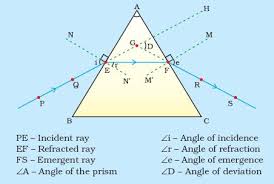 In theLight and Color unitof The Physics Classroom Tutorial, the visible light spectrum was introduced and discussed. Visible light, also known as white light, consists of a collection of component colors. These colors are often observed as light passes through a triangular prism. Upon passage through the prism, the white light is separated into its component colors - red, orange, yellow, green, blue and violet. The separation of visible light into its different colors is known asdispersion. It was mentioned in the Light and Color unit that each color is characteristic of a distinct wave frequency; and different frequencies of light waves will bend varying amounts upon passage through a prism. In this unit, we will investigate the dispersion of light in more detail, pondering the reasons why different frequencies of light bend or refract different amounts when passing through the prism.

Earlier in this unit, the concept ofoptical densitywas introduced. Different materials are distinguished from each other by their different optical densities. The optical density is simply a measure of the tendency of a material to slow down light as it travels through it. As mentioned earlier, a light wave traveling through a transparent material interacts with the atoms of that material. When a light wave impinges upon an atom of the material, it is absorbed by that atom. The absorbed energy causes the electrons in the atom to vibrate. If the frequency of the light wave does not match the resonance frequency of the vibrating electrons, then the light will be reemitted by the atom at the same frequency at which it impinged upon it. The light wave then travels through the interatomic vacuum towards the next atom of the material. Once it impinges upon the next atom, the process of absorption and re-emission is repeated.

The optical density of a material is the result of the tendency of the atoms of a material to maintain the absorbed energy of the light wave in the form of vibrating electrons before reemitting it as a new electromagnetic disturbance. Thus, while a light wave travels through a vacuum at a speed ofc(3.00 x 108m/s), it travels through a transparent material at speeds less thanc. Theindex of refraction value(n) provides a quantitative expression of the optical density of a given medium. Materials with higher index of refraction values have a tendency tohold ontothe absorbed light energy for greater lengths of time before reemitting it to the interatomic void. The more closely that the frequency of the light wave matches the resonant frequency of the electrons of the atoms of a material, the greater the optical density and the greater the index of refraction. A light wave would be slowed down to a greater extent when passing through such a material

What was not mentioned earlier in this unit is that the index of refraction values are dependent upon the frequency of light. For visible light, thenvalue does not show a large variation with frequency, but nonetheless it shows a variation. For instance for some types of glass, thenvalue for frequencies of violet light is 1.53; and thenvalue for frequencies of red light is 1.51. The absorption and re-emission process causes the higher frequency (lower wavelength) violet light to travel slower through crown glass than the lower frequency (higher wavelength) red light. It is this difference innvalue for the varying frequencies

(and wavelengths) that causes the dispersion of light by a triangular prism. Violet light, being slowed down to a greater extent by the absorption and re-emission process, refracts more than red light. Upon entry of white light at the first boundary of a triangular prism, there will be a slight separation of the white light into the component colors of the spectrum. Upon exiting the triangular prism at the second boundary, the separation becomes even greater andROYGBIVis observed in its splendor.

The Angle of Deviation

). The angle of deviation is the angle made between the incident ray of light entering thefirst faceof the prism and the refracted ray that emerges from thesecond faceof the prism. Because of the different indices of refraction for the different wavelengths of visible light, the angle of deviation varies with wavelength. Colors of the visible light spectrum that have shorter wavelengths (BIV) will deviated more from their original path than the colors with longer wavelengths (ROY). The emergence of different colors of light from a triangular prism at different angles leads an observer to see the component colors of visible light separated from each other.

Suppose that a flashlight could be covered with black paper with a slit across it so as to create a beam of white light. And suppose that the beam of white light with its component colors unseparated were directed at an angle towards the surface of a rectangular glass prism. As would be expected, the light would refract towards the normal upon entering the glass and away from the normal upon exiting the glass. But since the violet light has a shorter wavelength, it would refract more than the longer wavelength red light. The refraction of light at the entry location into the rectangular glass prism would cause a little separation of the white light. However, upon exiting the glass prism, the refraction takes place in the opposite direction. The light refracts away from the normal, with the violet light bending a bit more than the red light. Unlike the passage through the triangular prism with non-parallel sides, there is no overall angle of deviation for the various colors of white light. Both the red and the violet components of light are traveling in the same direction as they were traveling before entry into the prism. There is however a thin red fringe present on one end of the beam and thin violet fringe present on the opposite side of the beam. This fringe is evidence of dispersion. Because there is a different angle of deviation of the various components of white light after transmission across the first boundary, the violet is separated ever so slightly from the red. Upon transmission across the second boundary, the direction of refraction is reversed; yet because the violet light has traveled further downward when passing through the rectangle it is the primary color present in the lower edge of the beam. The same can be said for red light on the upper edge of the beam.

Dispersion of light provides evidence for the existence of a spectrum of wavelengths present in visible light. It is also the basis for understanding the formation of rainbows.

Refraction of Light through a Glass prism