draw a straight line consumption curve from it derive a savings curve explaining the process.

show on this diagram-

b) a level of income atwhich aps is negative. 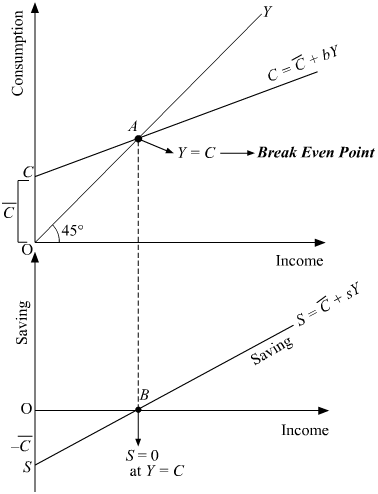 in the consumption function, there is

At point A, the 45° line intersects the consumption curve i.e. at point A, Income = Consumption. This implies that at point A, whole of the income is spent on consumption, therefore saving is zero. This point is known as break-even point. The corresponding point in the lower panel is point B represents zero level of savings (S = 0).

i. The point where APS is negative are the points that lie to the left of the point A. Here, consumption is greater than income, which implies that saving is negative. Thereby, APS given as (

ii. The point where APC is equal to 1 is the Break-even point. Here, the consumption is equal to Income (C = Y). Thereby, APC given as (