expilain mechanism of generation and conduction of nerve impulse?

Ion channels are present in neural membrane which is selectively permeable to different ions. When neuron is not conducting impulse (resting), axonal membrane is more permeable to K+ ions and impermeable to Na+ ions. Ionic gradient across the resting membrane is maintained by active transport of ions by sodium-potassium pump. This will develop positive charge outside the axonal membrane and negative charge on inner side. The electrical potential difference across the resting membrane is called resting potential. When stimulus is applied at site A, the membrane becomes permeable to Na+ ions to make rapid influx of Na+ ions to create outer surface negatively charged and inner membrane positively charged that create Action Potential or nerve impulse. The nerve impulse from A moves to B in inner surface and B to A on outer surface. This process is repeated several times to transmit the impulse. Nerve impulse is transmitted from one neuron to another neuron through synapse. There are two types of synapse- 1. Electrical synapse- the membrane of pre and post synaptic neuron is very close to each other and current flow directly from one neuron to another. 2. Chemical synapse- pre and post synaptic neuron is separated by fluid filled space called synaptic cleft. Neurotransmitters are involved in transmission of impulses.
View Full Answer 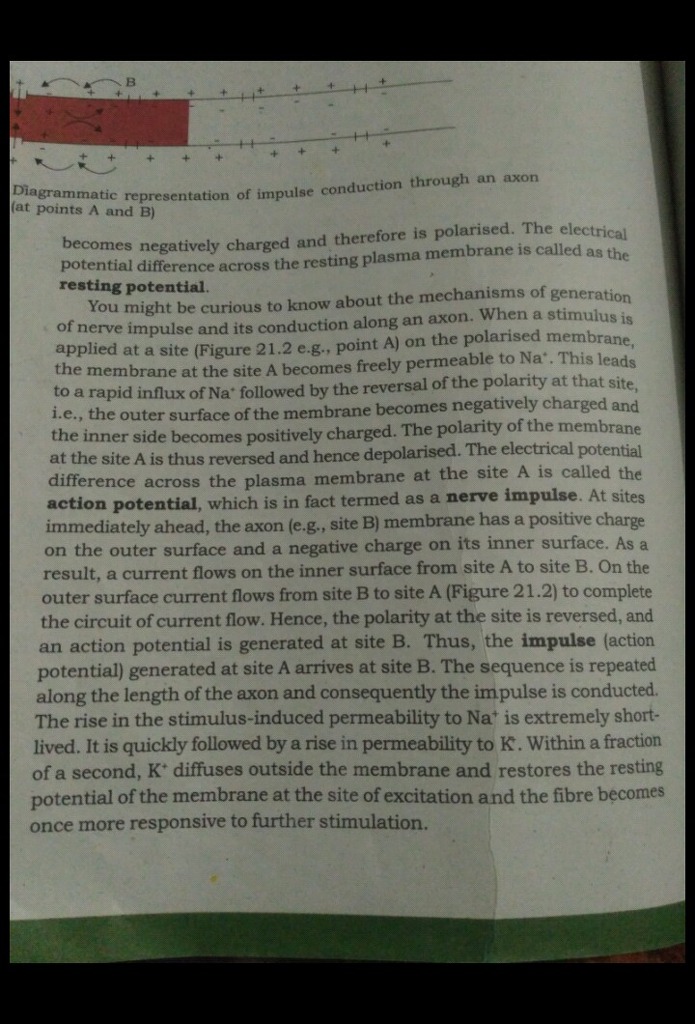 When we apply a stimulus at a site on the polarised membrane, the membrane at the site becomes freely permeable to sodium ions. Due to this, sodium ions move into the cell and the outer side of the membrane becomes negatively charged and the inner side becomes positively charged. The membrane is said to be in the depolarised state. The electrical potential difference generated across the plasma membrane at this site is known as action potential or nerve impulse. This area becomes a stimulus for the neighboring area of the membrane which becomes depolarised. The former membrane becomes repolarised due to the movement of sodium ions outside the cell. This is how impulses are conducted.
What are you looking for?