Carbon cycle is the biogeochemical cycle which includes the movement of carbon between biosphere, oceans, atmosphere and geosphere. All living things are made up of carbon. Carbon is found in various forms such as carbon dioxide, carbonate etc. During the day, plants absorb CO2 from the atmosphere due to the process of photosynthesis and release back CO2,during night when they respire. Further when the plants die, their remains gets converted into the fossils like coal which contain carbon. When animal eats these plants, the carbon present in the plant gets transferred to the body of the animal. The remains of the animals after their death, gets converted into fossil fuels, inorganic carbonates (shells) etc. Also, respiration and decomposition of dead remains of these animals, releases back the carbon to the atmosphere which is again used by plants during the process of photosynthesis and the cycle goes on. Combustion of fuels also releases carbon dioxide to the atmosphere. 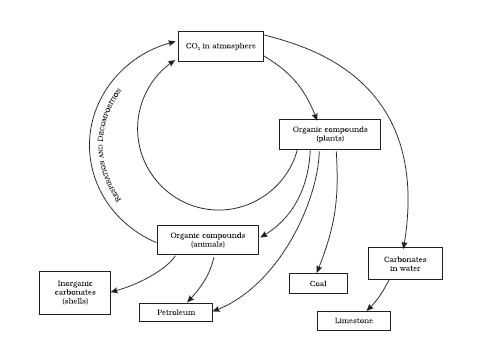 The importance of carbon cycle is that it helps in movement of carbon through all the spheres of earth and maintaining optimum concentrations in each sphere. It also helps in the regulation of the climatic conditions. A minor disturbance in the balance between the carbon concentrations in these spheres may result in serious consequences like global warming.