The chemical bonding in Potassium Ferrocyanide and Perchloric acid can be explained as:

​The chemical structure of Potassium Ferrocyanide is as follows:

This compound contains covalent, coordinate and ionic bonds.
Nitrogen has three valence electrons, carbon has four valence electrons. So, because of minimal difference between nitrogen and carbon, they form three covalent bonds between them.
Now, iron has free valence orbitals. So, carbon donates a lone pair of electron to form a coordinate bond with the iron atom.Six carbon atoms form six coordinate bonds with a central iron atom. Since the carbon atom contains a free electron, the overall complex has a charge of -4.
So, this complex forms an ionic bond with four potassium atoms, which have a charge of +1 each. 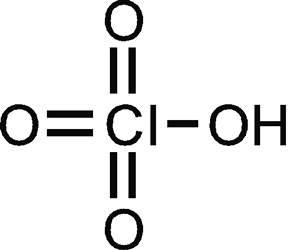 Let us know if you have further queries.