Explain consumption function with the help of diagram and schedule ?plz note that it is 6 marks q.

The Law of Consumption states that there is a tendency among people not to spend whole of their additional income on consumption, they save a potion of income.

1) Autonomous Consumption Expenditure : It refers to that portion of expenditure that is independent of disposable income.

2) Induced Consumption Expenditure : It refers to that portion of expenditure that is dependent on level of disposable  income. 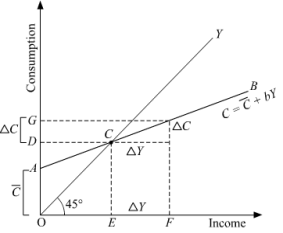