The working of a cyclotron is based on the fact that the frequency of revolution of charged particle is not dependent on the energy. 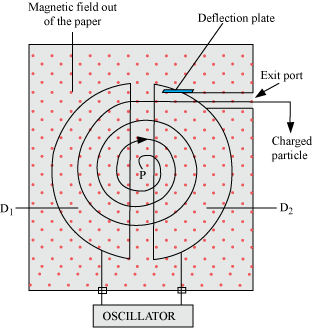 Hence, the path is a spiral one.

This frequency is called the cyclotron frequency.

The working principle of a cyclotron involves the use of an electric field to accelerate charge particles across the gap between two D shaped magnetic field regions. The magnetic field is perpendicular to the paths of the charged particles makes them follow circular paths within two Dees. An alternating voltage accelerates the charged particles each time they cross the Dees. The radius of each particle’s path increases with its speed, so the accelerated particles spiral toward the outer wall of the cyclotron.