Explain electrolytic decomposition of water with the help of diagram.

Similarly, when a glowing matchstick is brought close to the mouth of the tube containing gas formed at anode, it burns more brightly. This confirms oxygen is formed at anode. 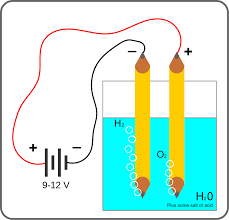