Explain how a p-type & n-type semiconductors are formed ????

Doping is a process of deliberate addition of a desirable impurity atoms to a pure semiconductor to modify its properties in a controlled manner. 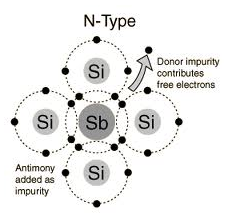 when a pure semiconductor such as Ge is doped with controlled amount of trivalent atoms say Indium, which have three valence electrons , the impurity atom replaces the Ge atom. Three valence electrons of the impurity atoms form covalent bonds by sharing the electrons of the adjoining 3 atoms of Ge , while there will be 1 incomplete covalent bond with the neighbouring Ge atom, due to deficiency of electron. This deficiency is compensated by taking an electron from another Ge- Ge bond . This electron leaves a hole or positive charge behind. This positive charge constitutes the hole current, in p – type semiconductor.

This involves chemical elements silicon and germanium. The addition of a small amount of foreign atoms in the regular crystal lattice of silicon or germanium produces the changes in their electrical properties, producing the n-type and p-type semiconductors.