This method is based on the principle that impurities are more soluble in the molten state of metal (the melt) than in the solid state. In the process of zone refining, a circular mobile heater is fixed at one end of a rod of impure metal. As the heater moves, the molten zone of the rod also moves with it. As a result, pure metal crystallizes out of the melt and the impurities pass onto the adjacent molten zone. This process is repeated several times, which leads to the segregation of impurities at one end of the rod. Then, the end with the impurities is cut off. Silicon, boron, gallium, indium etc. can be purified by this process.

Column chromatography is a technique used to separate different components of a mixture. It is a very useful technique used for the purification of elements available in minute quantities. It is also used to remove the impurities that are not very different in chemical properties from the element to be purified. Chromatography is based on the principle that different components of a mixture are differently adsorbed on an adsorbent. In chromatography, there are two phases: mobile phase and stationary phase. The stationary phase is immobile and immiscible. Al2O3 column is usually used as the stationary phase in column chromatography. The mobile phase may be a gas, liquid, or supercritical fluid in which the sample extract is dissolved. Then, the mobile phase is forced to move through the stationary phase. The component that is more strongly adsorbed on the column takes a longer time to travel through it than the component that is weakly adsorbed. The adsorbed components are then removed (eluted) using a suitable solvent (eluant). 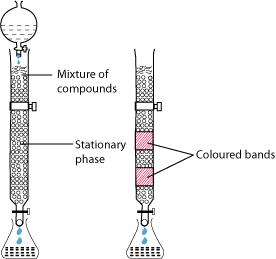