explain the 4 drainage patterns with diagrams?

The land area whose runoff drains through a single stream is called that stream's DRAINAGE BASIN.  The area outside the Roney Building at GSW, for instance, provides runoff to the small stream that drains College Lake, and so is in the drainage basin of that stream.  That stream feeds Willet Creek a few dozen meters downstream and so we are also in the Willet Creek drainage basin.  Willet Creek is tributary to Mill Creek, Mill Creek to Muckalee Creek, Muckalee to the Flint River, and the Flint to the Appalachicola, which drains into the Gulf.  The Roney building therefore sits in the drainage basin of each of these streams in turn.

rainage pattern refers to the spatial arrangement and form of drainage systems corresponding to geometric shapes. These are dependent on rock types, geological structure and climatic conditions. The following are the prominent drainage patterns:

Drainage pattern refers to the spatial arrangement and form of drainage systems corresponding to geometric shapes. These are dependent on rock types, geological structure and climatic conditions. The following are the prominent drainage patterns:

can anyone tell me plz

Please be more particular about which topic you need the information.

Dendritic drainage pattern: The name is derived from the Greek word dendron which means a 'tree'. This drainage pattern is similar to a branching tree and hence the name. This pattern of flow of streams and rivers develops in an area which comprises rocks with a uniform structure. The direction taken by the river and its tributaries is largely dependent on the slope. The water channels thus flow through the valleys between the ridges and spurs resulting in the river and its tributaries making a pattern that resembles a tree and its branches.

Trellised drainage pattern: It is a rectangular shaped drainage pattern that develops where bands of rocks vary in resistance. In some areas there are alternate bands of hard and soft rocks. The flowing water can erode the soft rocks and thus flows along the bands of soft rock. Many such water channels form a trellis. The streams (called subsequent rivers) cut out the valleys (called vales) and join the main river (called consequent river) at right angles. The main river, by sheer force, cuts the hard rock and flows down the slope forming an escarpment and thus a river gap is created.

Radial drainage pattern: It is a 'spoke- like' pattern. Water channels flow from around the top if a hill or the top of a dome type feature in numerous directions like the spokes of a wheel. Such a pattern of drainage may develop from a volcano or conical mountain.

In a parallel drainage pattern, a number of streams flow parallel to each other by following the slope of the region.

This are the 4 drainage patterns.

Shote note on islands of bay of Bengal there are 5 Ganga delta there Gangotri Yamunotri Dendritic- It resembles the shape of a tree and is the most common pattern on the earth?s surface. It develops in regions where the river channel follows the slope of the terrain. Trellis- It is formed when the tributaries of a river join it at right angles to form numerous longitudinal streams. It develops in regions where hard and soft rocks exist parallel to each other. Rectangular- It develops in regions having strongly jointed rocky terrain. The tributaries are more widely spaced in this pattern compared to trellis pattern. The angle of con?uence is determined by faults and fractures among the rocks in this terrain. Radial- It develops when streams diverge from a central higher point or dome towards all directions. Thus, it resembles a centrifugal pattern where the arrangement of streams is similar to spokes of a wheel.? Diagram is shown below 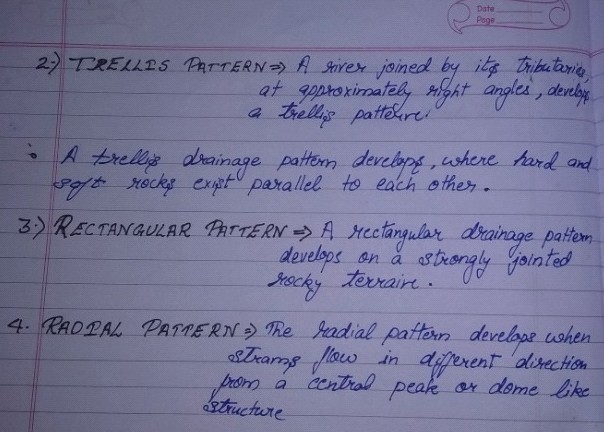 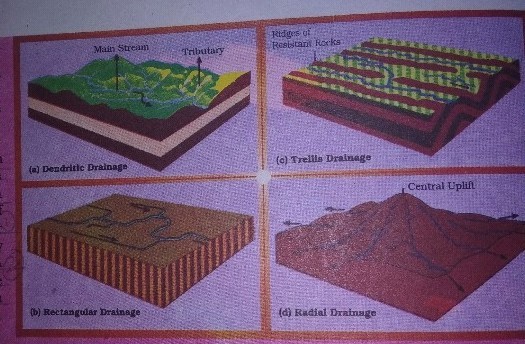