explain the life history of a silk moth?

Kindly refer to the following link:

First of all, an adult silh moth (female) lays eggs, then through these eggs a catterpillar or larvae hatches out. It eats a lot and then weaves a net around itself called pupa or cocoon . Through this cocoon silk is obtaines and processed in factories.

Draw and describe the life history of Silk worm

First of all, an adult silh moth (female) lays eggs, then through these eggs a catterpillar or larvae hatches out. It eats a lot and then weaves a net around itself called pupa or cocoon . Through this cocoon silk is obtaines and processed in factories.

The most popular among the silk moths is Bombyx mori which is popu­larly called the mulberry silkworm, as its main feed is mulberry plant. The life history of mulberry silk worm consists of four stages- the adult, the egg, the larva (catripillar) and the pupa stage.

The adult silk moth is about 2.5 cms in length and pale creamy or white in colour. The moths are dioecious (male and female moths are separate). In the female, due to the heavy body and generally weak wings flight is impossible. The female moths are larger than the male.

The body of the moth is divided into three parts namely head, thorax and abdomen. The head has got a pair of compound eyes and there are two antennae. There are three segments in the thorax- these are the prothorax, the mesothorax and the metathorax. The prothorax is quite big. The moth has got three pairs of legs and there are two pairs of wings. The female moth generally does not feed during its very short life of about 2-3 days.

After copulation, fertilization takes place. Just after the emer­gence from the pupa, the male moth copulates with the female for about 2- 3 hours and then they separate. After fertilization the female starts laying eggs and it takes about 24 hours to complete the process.

On an average a single moth can lay about 400-500 eggs. The quantity of eggs depends on the climatic conditions and the supply of food material to the caterpillar from which the female moth is developed. They (eggs) are usually laid on the upper surface of the mulberry leaves. The eggs are usually in clusters and are enclosed in a gelatinous substance which is secreted by the female moth. The gelatinous substance helps in the attachment of the eggs to the leaves.

The eggs are minute in size, spherical in shape and white in colour. The weight of about lOOOeggs will be less than one gram. Gradually the eggs become dark in colour. It has been observed that in mulberry silk worms there are two types of eggs.

The newly hatched larva is about l/8th of an inch in length. The body is yellowish white in colour. The larvae are provided with well developed mouth parts which are adopted to feed on the leaves of mulberry. In structure, the larval body is made up of 12 segments and the abdomen is made up of 10 segments and has 5 pairs of pseudo-legs. In addition to this, in the last anal segment there is a small dorsal horn. The silk worms undergo moulting (ecdysis) four times and the stages in between the mountings are called instars. There are 5 instars in the lar­val stage of silk moth.

The first instar larva can feed only on tender leaves of mulberry as it is at a very young stage. The first instar larva feeds continuously and grows rapidly. After the first, second, third and fourth moultings the larva grows into second, third, fourth and fifth instars respectively. The whole moult­ing process upto the 5th instar stage takes about 21-25 days after hatching. The 5th stage larva or the caterpillar can be regarded as the final stage of growth. The caterpillars at this stage are fully grown and measure about 7.5 cms in length and in weight it ranges between 4-6 gms. The caterpil­lars develop salivary glands and generally stop feeding before they reached the pupa stage.

This is the next stage of development. Initially the fully grown caterpillars stop eating and gradually withdraw towards a comer among the leaves in the feeding trays. They secrete a sticky fluid through the silk glands. The fluid comes out through a narrow pore located on the hypopharynx of the caterpillar. The fluid gradually comes out in the form of delicate threads which hardens on exposure to air. Gradually the number of threads coming out of the caterpillar increase and they form a covering around the body called the cocoon.

The cocoon is a covering generally white in colour and is made up of closed weaving of the silk threads. In the cocoon the threads on the exterior are somewhat irregular while those present towards the inner re­gion of the cocoon are regular in arrangement. It has been estimated that the length of a single continuous thread secreted by a pupa for the forma­tion of cocoon is about 1000-2000 mts in length. The secretion of this thread requires about 3 days time. The arrangement of the thread in the cocoon is in a concentric manner. In order to arrange the thread in a con­centric manner the pupa rotates its head at the rate of 65 times per minute constantly.

A fully formed cocoon has the pupa inside. Estimates have shown that 2500 cocoons can yield upto one pound of silk. In the weight of the co­coon (1.8-2.2 gms) the shell which is useful in extracting silk is only about 0.45 gms. The pupal stage takes about 10-12 days to complete the life cycle. At the end of this stage the pupa would have grown into an adult (imago) and it comes out of the cocoon by cutting it open.

Emergence of the adult moth (imago): 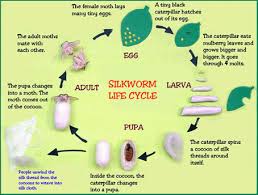 Silk is an animal fibre, which is obtained from silkworms that live on mulberry trees. The rearing of silkworms to obtain silk is known as sericulture. During a stage of its life cycle, the silkworm weaves a net around itself. Silk is then obtained from this net. To get an insight of this process, we will first study the life cycle of a silkworm. 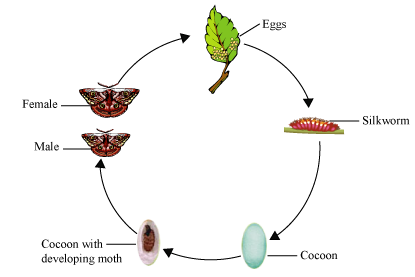 The life of a silkworm starts when a female moth lays eggs on the mulberry leaves. After sometime, these eggs hatch into larvae. These larvae are known as caterpillars or silkworms. Slowly these caterpillars grow in size by feeding only on the leaves of mulberry trees.

The next stage in the life cycle of a silkworm is a pupa. When the caterpillar has grown large enough and is ready to go to the stage of pupa, it starts weaving a net around itself to hold itself. Then, it moves its head from one side to another, making a figure eight (8). During these movements, caterpillars secrete a fibre made of protein, which solidifies and hardens when exposed to air for some time. This is the silk fibre. Caterpillars continue to spin silk fibre till they completely get covered by these fibres. This silk covering in which a silkworm covers itself is known as a cocoon. Further development of the silkworm takes place inside the cocoon, and it enters the pupa stage. After sometime, the pupa enters into the adult stage and emerges out of the cocoon as a moth. The whole process thus continues and is known as the life cycle of a silkworm.