Explain the meaning of bracketed lines 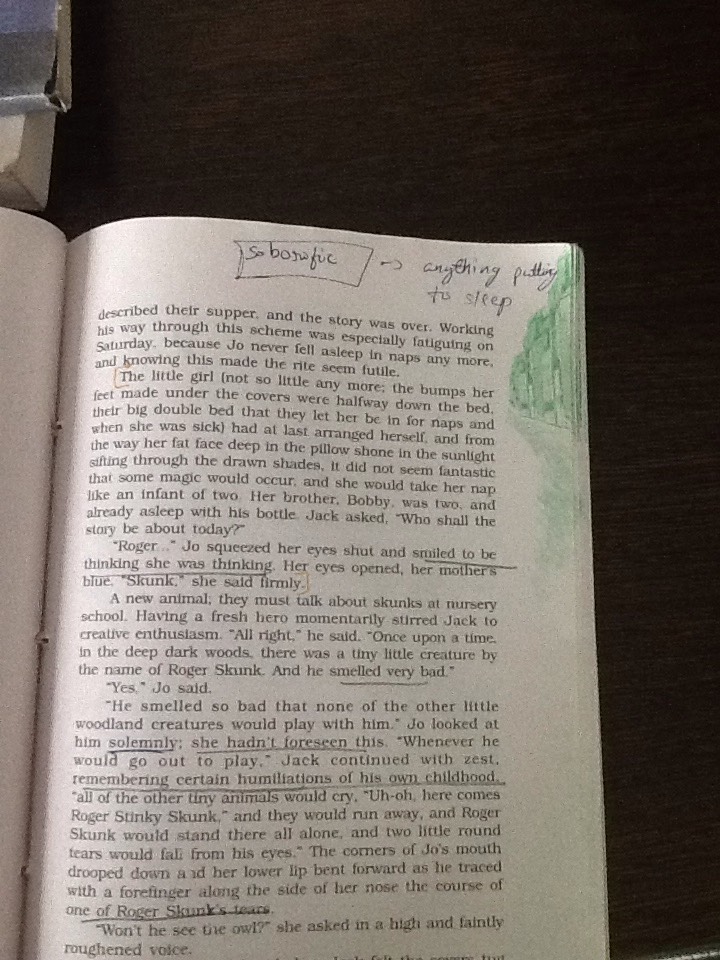 Explain the meaning of bracketed lines described their supper. and the story was over. workLng his way through this scheme especially faugu'ng on S,uyrday- because Jo never fetl asleep In naps any more. Q. and_Enowing [his made the rite seem futile. The Iftue girl (not so little any more; the bumps her feet fiv.ide under the Tovers welt halfway down the bed their big double bed that they let her bc in for naps and Then she uns sick) had at last arranged herself. and from way her fat face deep in the pillow shone in the sunlight through the draw-n shades. It did not seem tantastic tha' some maglc would occur. and she would take her nap like an infant or two Her brother. Bobby. uras and already asleep with his bottle, Juck asked, shall the sttny be about todayæ- -Roger • Jo squeezed her eyes shut and smiled to be thinking she was thinkin . Her eyes opened, rrnly.{ A new antrnd they must talk about skunks nursen' school. Having a fresh hero momentarily stirred Jack to creative enthusiasm. - All right.- he said. -Once upon time. in the deep dark woods. there was tiny little creature by the name of Roger Skunk- And he smelled very bad.' -Yes:' Jo said. - He smelled so bad that none Of the other Hitle woodland creatures would play with him. • Jo looked at him solemnl she hadn't. '&isv •Whenever he would go out to play.- Jack continued zest, remember" certain humiliations would cry. • Uh-oh. here comes - all of the o er Roger Stinky Skunk.- and they would non away, and Roger Skunk would stand there all alone, and two little round tears Would faii from his eyes.- The comers of Jo's mouth drooped down her lower lip bent forward as he traced With a forefinger the side 01 her nose the course of ane of -Won't he sec owl?' she asked in high and faintly roughened voice.

“The little girl (not so little anymore; the bumps her feet made under the covers were halfway down the bed, their big double bed that they let her be in for naps and when she was sick) had at last arranged herself..”

This sentence shows how much little Jo has grown, with her feet reaching halfway across the big double bed. Jo was allowed to be on her parents’ bed for naps, and also, when she was sick. She was fidgeting on the bed to find a suitable position in which she was comfortable enough to hear her father’s story.

“From the way her fat face deep in the pillow shone in the sunlight sifting through the drawn shades, it did not seem fantastic that some magic would occur, and she would take her nap like an infant of two.”

Her chubby face was lit up in by the sunlight, lowly trickling through the drawn shades and it looked almost magical. Recently, Jo wasn’t falling asleep as readily as she used to, when she was younger. But, the beautiful look on her face made the father think that she might just magically take her nap in an instant, like a two year old baby, just like her brother.

Jack asked, “Who shall the story be about today?”

It had been a father-daughter ritual for Jack to tell Jo a completely made up story about a small creature, during the evenings or during her Saturday naps. That’s why Jack asks Jo who the story will be about, for her naptime.

Roger...” Jo squeezed her eyes shut and smiled to be thinking she was thinking. Her eyes opened, her mother’s blue. “Skunk,” she said firmly.

Roger is always the name given to small creatures, the main characters of Jack’s story. Here, Jo is taking her time imagining what new creature will be the basis for Jack’s story. She is excitedly looking forward to hearing the story about the creature called skunk, an animal with a very strong smell. “Her eyes opened, her mother’s blue” is to say that Jo’s eyes and her mother’s looked very similar and were of the same blue colour.

Hope this answers your question. For further doubts, please ask on the forum and our experts will be happy to help you as soon as possible.
Regards.

" she hadnt foreseen this" is for that Jo didnt hv seen this means she hadnt imagined that there will b a negative turn to the story..-ve turn was whn father said that no one would play wid him

"remembering.....childhood" refers to Jack ..these lines tell that at some point in his childhood Jack also faced the humiliation which he is telling to Jo as Skunk's stopry
What are you looking for?