Explain the nitrogen cycle in brief. With diagram

Dear Student,
Nitrogen cycle is the biogeochemical cycle that describes the transformation of nitrogen and nitrogen-containing compounds in nature. Atmospheric nitrogen is the biggest source of nitrogen. Green plants absorb nitrogen in the form of nitrates and nitrites from the soil and water. Animals get nitrogen when they feed upon plants. Nitrogen is an essential component of proteins and nucleic acids in living organisms.
The nitrogen cycle can be studied in five steps:
i. Nitrogen fixation : Free living micro-organisms present in the soil and by the symbiotic bacteria in the root nodules of certain leguminous plants: Microbes like the blue green algae and bacteria fix the atmospheric nitrogen into nitrites and nitrates. These nitrogenous compounds are then released into the soil.
ii. Nitrogen assimilation: Plants absorb nitrogen in the form of nitrates to prepare amino acids. This nitrogen is then taken up by the animals in the form of proteins through the food chain.
iii. Ammonification: The proteins in the body of the animal sare broken down into simpler form like urea and ammonia. These are then removed from the body along with urine and excreta. Dead plants and animals also return nitrogen to the soil as ammonium compounds. These ammonium compounds are then converted to ammonia by ammonifying bacteria.
iv. Nitrification: Conversion of ammonia into nitrates is called nitrification. Nitrifying bacteria like Nitrosobacter and Nitrosomonas found in the soil convert ammonia into nitrate. Some other bacteria present in the soil convert ammonia into nitrites. Some of this nitrates and nitrites are again taken up by the plants for their nutrition.
v. Denitrification : Denitrifying bacteria like Pseudomonas and Clostridium living in the soil reduce the soil nitrites and nitrates into nitrogen which is returned back into the atmosphere. 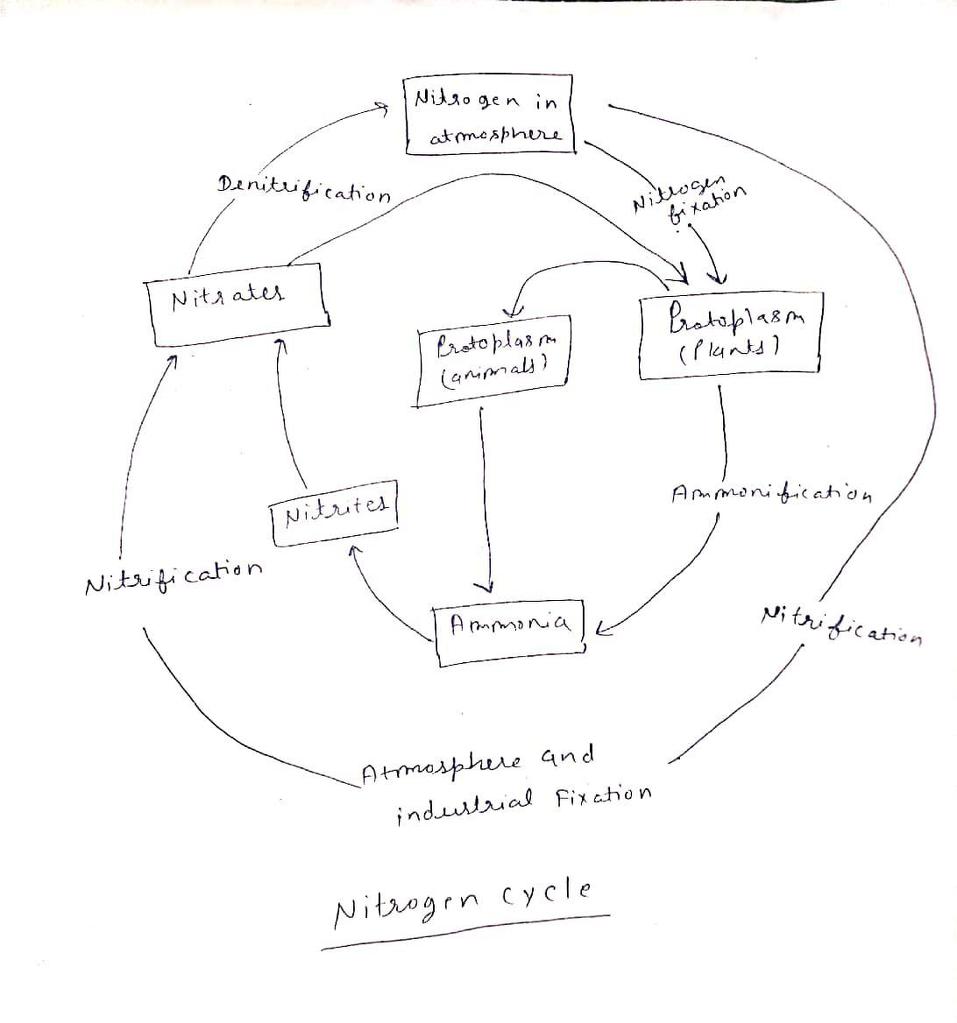 The Nitrogen Cycle:?Organisms require nitrogen to produce amino acids. Nitrogen makes up 70% of the atmosphere, but most organisms can not use this form of nitrogen, and must have the fixed form. The nitrogen cycle produces the fixed form of nitrogen these organisms need.
?Step 1: The nitrogen fixing bacteria take atmospheric nitrogen and produce ammonia (NH3).
Step 2: Other bacteria use this ammonia to produce nitrates and nitrites, which are nitrogen and oxygen containing compounds.
Step 3: The nitrates and nitrites are used by plants to make amino acids which are then used to make plant proteins.
Step 4: Plants are consumed by other organisms which use the plant amino acids to make their own.
Step 5: Decomposers convert the nitrogen found in other organisms into ammonia and return it to the soil. A few of these types of bacteria return nitrogen to the atmosphere by a process called denitrification, however this amount is small.

And here is diagram