explain the structure and function of a nephron.

The kidneys consist of a cluster of very thin-walled capillaries. Each cluster is associated with a cup-shaped end of a tube, in which filtered urine is collected. These basic filtering units of the kidneys are called nephrons. Each kidney possesses a large number of nephrons (approximately 1- 1.5 million). 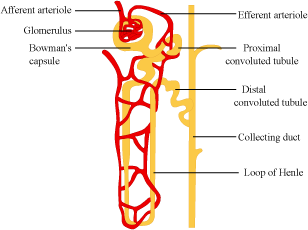 Structure of a nephron

In the proximal tubule, some substances such as amino acids, glucose, and salts are selectively reabsorbed and unwanted molecules are added in the urine. The filtrate then moves down into the loop of Henle, in which more water is reabsorbed. From here, the filtrate moves upwards into the distal tubule, and finally to the collecting duct. This duct collects urine from many nephrons.

The urine formed in each kidney then enters a long tube called the ureter. The ureters move the urine from the kidneys to the urinary bladder. The urinary bladder is under the control of the nervous system. This helps us to control the urge to urinate.

The Nephron - Structure and Function of the Nephron

The NephronThe nephron is the tiny filtering structure in yourkidneys. Each of your kidneys contain more than a million tiny filtering nephrons that help clean your blood.Function of the NephronsYour nephrons help:Each nephron is composed of two main structures: the glomerulus and renal (kidney) tubule.The GlomerulusThe glomerulus is a tiny blood vessel or capillary, which looks like a ball of yarn. Actual filtering of your blood occurs in the glomerulus.Each of your glomeruli acts like a sieve that helps keep normal proteins and cells in your bloodstream and allows wastes, excess fluid and other substances to pass.The TubuleThe tubule, also called renal or kidney tubule, is a tiny tube where the wastes, extra fluid and other recyclable substances like sodium and potassium filtered out from the glomerulus pass through.The Nephron: Showing theGlomerulus and TubuleYour kidneys measure out chemicals like sodium, phosphorus, and potassium and release them back to the blood to return to the body when need arises. In this way, your kidneys regulate the your bodys level of these substances. The right balance is necessary for you to function properly.