Explain the structure of Chloroplast?

Please find your answer below to the asked query :

Plastid which is green in colour is Chloroplast. It is involved in photosynthesis.
Chloroplast 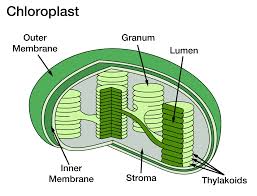 The chloroplast double membrane is also often compared to the mitochondrial double membrane. This is not a valid comparison—the inner mitochondria membrane is used to run proton pumps and carry out oxidative phosphorylation across to generate ATP energy. The only chloroplast structure that can considered analogous to it is the internal thylakoid system. Even so, in terms of "in-out", the direction of chloroplast H+ ion flow is in the opposite direction compared to oxidative phosphorylation in mitochondria. In addition, in terms of function, the inner chloroplast membrane, which regulates metabolite passage and synthesizes some materials, has no counterpart in the mitochondrion.

Hope that helps you.