Hi experts ..pls.explain "celvin cycle " ( i am attaching an image for reference) 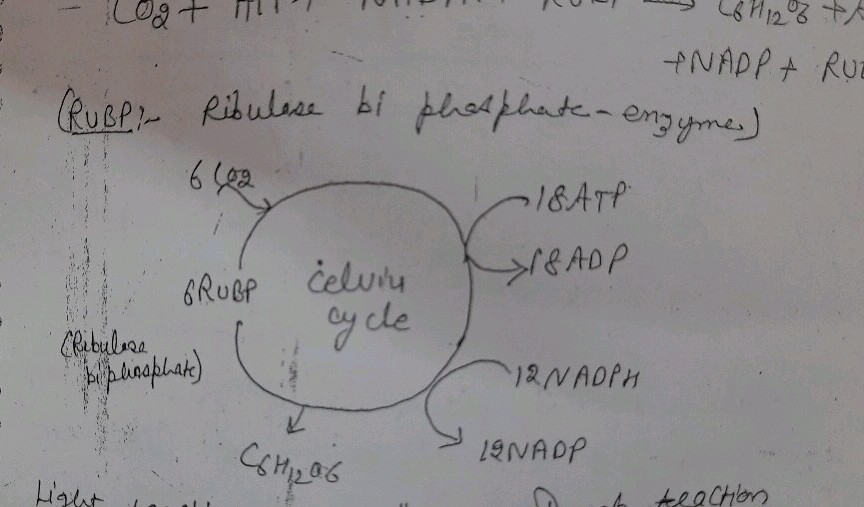 Calvin cycle is the process by which plants and some algae convert atmospheric carbon dioxide into sugars. It is also referred as Calvin Benson Bassham (CBB) cycle, reductive pentose phosphate cycle and C3 cycle. This process can be performed even in absence of light. It consists of 3 stages:
1. Carbon fixation Phase (Also called as Carboxylation Phase): ​​​​​​Ribulose 1, 5-bisphosphate combines with Carbon dioxide  ​​​​​​and converted into 3-phosphoglycerate (2 molecules), by the action of enzyme RuBisCO (RuBP Carboxylase-Oxygenase). 3 Phosphoglycerate is called as the first stable product of Calvinn cycle.
2. Reduction Phase: Bu using reductive powers (ATP and NADPH), 3-PGA (3-Phosphoglycerate) is converted into glyceraldehyde-3-phosphate (G3P). This phase is named reduction phase because of the essential role played by NADPH (i.e. reduction of 3-PGA to G3P)
​​​​​3. Regeneration phase: Some of the G3P molecules are channelised into making glucose, while others are recycled to regenerate the RuBP acceptor.
(One G3P exits the cycle and rest go towards glucose synthesis. Three carbon dioxide molecules upon entering the Calvin cycle produce six G3P molecules. Five of these molecules form the glucose and one of the molecule is utilised in regeneration of RuBP acceptor.)