how are evaporation & condensation useful in watercycle

The water cycle is called the hydrologic cycle. In the hydrologic cycle, water from oceans, lakes, swamps, rivers, plants, and even you, can turn into water vapor. Water vapor condenses into millions of tiny droplets that form clouds. Clouds lose their water as rain or snow, which is called precipitation. Precipitation is either absorbed into the ground or runs off into rivers. Water that was absorbed into the ground is taken up by plants and animals. Plants lose water from their surfaces as vapor back into the atmosphere. Water that runs off into rivers flows into ponds, lakes, or oceans where it evaporates back into the atmosphere. 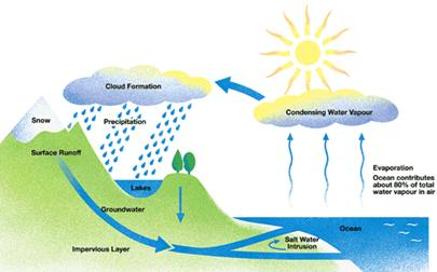