DEFINITION​: Emulsifiers helps in stabilising the emulsion whenever it is unstable(i.e., the dispersion medium and the dispersed phase forms separate layers)

HOW DO THEY STABILISE?
ans: 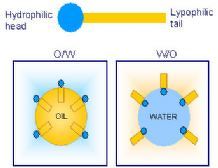 The emulsifiers contains and hydrophillic head and a hydrophobic tail(example: soaps), when they are added to unstable emulsions(say oil in water(first picture in diagram)), they forms an associated aggregate(micelle) around the oil droplets, hence the oil droplets become negatively charged(see blue coloured COO- ions[hydrophillic head]), as such, being equally charged, these oil droplets repell each other, go far away and the emulsion becomes stable.

examples of emulsifiers: soaps, proteins.
What are you looking for?