how does an electric torch work

Electricity runs from the battery into the spring and metal connections into the bulb, the element heats up with the charge making it glow, the Lens and reflective cone emits out a beam,the switch connects or breaks the circuit.Give thumbs up.

This is a well labelled diagram showing how a torch works. The electric power from the cells through the wire passes an reaches the poles of he bulb.You might see a metal strip attached under the switch. When the switch is in the 'ON ' position the metal strip gets connected to both the wires and when the switch is in the 'OFF ' position then the metal strip might get connected to one of the the wires or neither of them. THIS IS HOW A TORCH WORKS!!!

A torch is a practical example of a simple electric circuit. It is an electric device that emits light. It consists of a bulb, electric cells, a switch, a reflector, and a cylindrical shape casing.

Function of each component of a torch 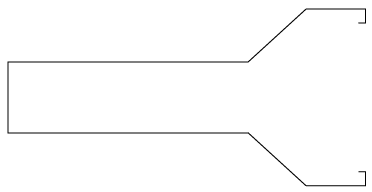 Function of each component of a torch

if you saw the video you could have got your answer easily it is specified in the first video itself!!!

it works with an electric cell

Torch – a Simple Circuit Apparatus a few cheap torches that can be taken apart Action The students take the torches apart, identify the components and draw a circuit diagram for the torch. They should try to identify the current path. The Physics The torch is a very simple circuit, containing only three components; a switch, a globe and a battery. The components are connected in series. The battery stores energy as electric potential energy, which is converted to light and heat by the globe, when the switch is closed to connect the circuit. For a current to flow and the torch to work there needs to be a complete circuit. In a metal cased torch the case itself often forms part of the circuit. 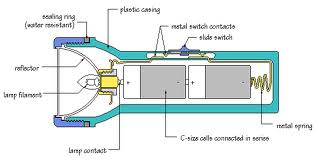 plz give me thumps up

A torch is a fire source, usually a rod-shaped piece of wood with a soaked in pitch and/or some other flammable material wrapped around one end. Torches were often supported in sconces by brackets high up on walls, to throw light over corridors in stone structures such as castles or crypts. This traditional use of the word lives on in the Olympic Torch, procession torches and the like.

A torch carried in relay by cross-country runners is used to light the Olympic flame which burns without interruption until the end of the Games. These torches and relay tradition were introduced in 1936 Summer Olympics by Carl Diem, the chairman of the event because during the duration of the Ancient Olympic Games in Olympia, a sacred flame burns inside of the temple of Hera, kept in custody by her priestess.

If a torch is made of sulfur mixed with lime, the fire will not diminish after being plunged into water. Such torches were used by the ancient Romans.

Procession torches are made from coarse hessian rolled into a tube and soaked in wax. There is usually a wooden handle and a cardboard collar to deflect any wax droplets. They are an easy, safe and relatively cheap way to hold a flame aloft in a parade, or to provide illumination in any after-dark celebration. 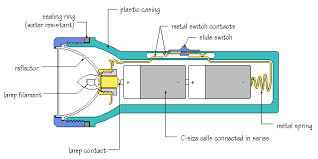 Juggling torches are often used as a prop in toss juggling: they can be flipped into the air in an end-over-end motion while being juggled, in the same manner as juggling clubs or juggling knives, but because of their sound and 'trail of flame', they can appear much more impressive to audiences. To a skilled juggler, there is only a slight chance of being burned, but they are still dangerous.

An electric torch has two terminals they are as follows :-

So, can you ++together no because if they are together then the bulb will not glow and if + - it is like this then only the bulb will glow.

i not have picture but tourch work with batteries

A torch works with the help of batteries.A torch consists of a torch bulb,slide switch,a reflector,
batteries,a plastic casing.When we slide the switch to on position,the circuit gets completed and
the bulb starts to glow,but when we slide the switch to off position,the completed circuit breaks and the bulb stops glowing.A switch is used to complete a circuit or to break a circuit.

A torch has two or more cells. They placed in a such a way that the positve end of one touches the negative end of other cell.The are in series these are connected through a switch to a bulb.the negative terminal of the cell presses against at the base.When the switch is pused to the on poistion ,the bulb glows.In this way eletric torch work.

A torch consist of a plastic casing,a bulb ,electric cells. a slide switch and a reflector. Firstly complete the circuit and then put two electric cells or batteries into the plastic case.when you close the switch the circuit will be complete and the bulb will glow. The reflector will pass the light too the big distance and and lighten the distance upto where the light the goes.

can you please tell me the name of your book

Batteries generate electricity that flows to the bulb of a torch as soon as it is switched on. As a result the bulb lights up. The bulb of a torch is more or less similar to an electric bulb. The only difference is that it light up with a low current of a few volts. The batteries supply this current. As soon as the torch is switched on, the chemical present inside the batteries produces an electric current. These batteries are connected to the bulb with the help of a switch. A curved mirror is situated behind the bulb which reflects the light of the bulb in the form of a beam. 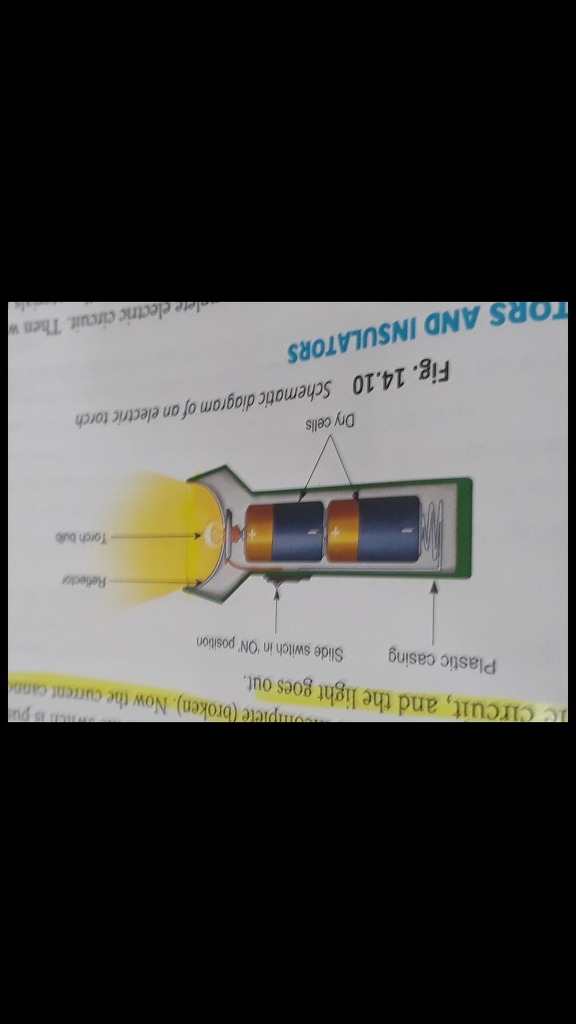 The chemicals (alkaline) stored in the cell is converted into electric current by the wires or the metal strip present in the torch. So when the switch is switched on, the current passes through the incomplete circuit to make it closed. The current passes through the bulb's filament which is made of a high-resistance metal,because of this resistance to pass the current,it gets hot and red and thus gives us light and heat energy.

A torch generally works with the help of batteries that are placed inside the batteries are placed with oppposite terminals facing each other this provides sufficient energy gor the bulb that is placed on the top and is protected with plastic casing. Hope this helps

when the contacts come close together and let the electricity to pass through it.

I do not no 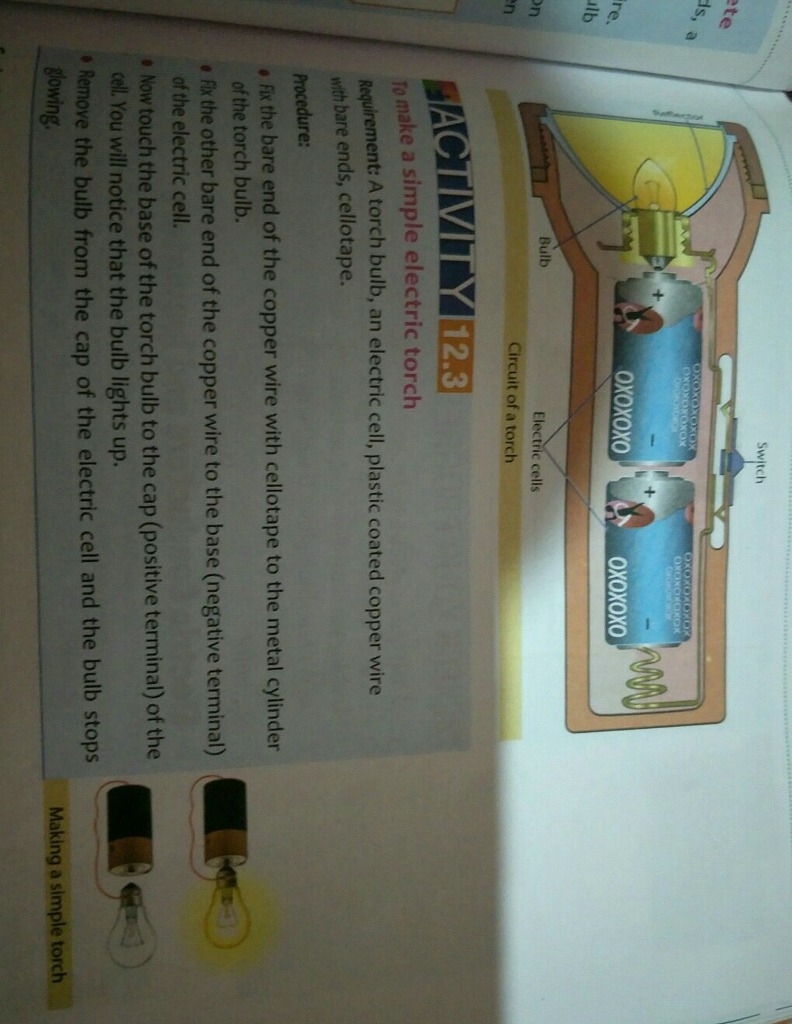 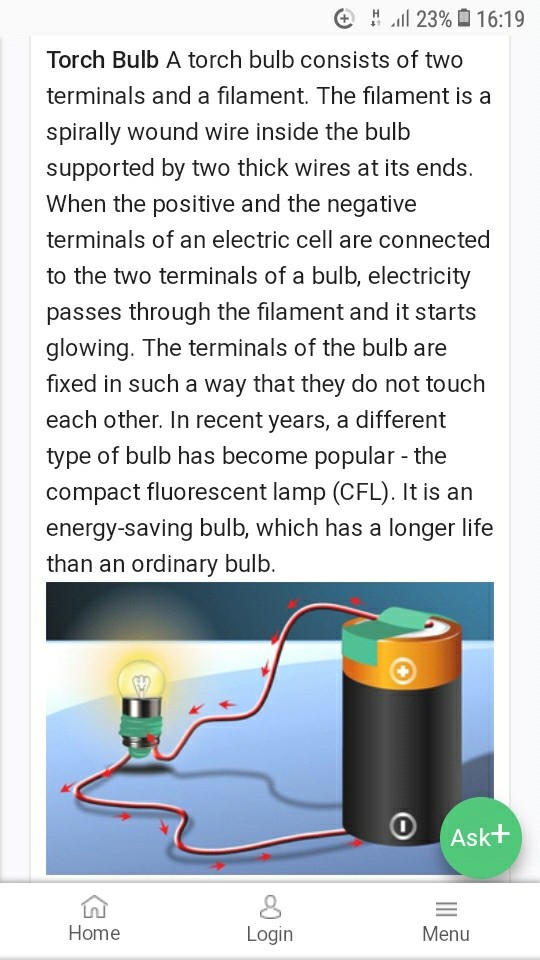 When you enter a cell or two or more cells the minus and plus points of the battery provides energy to the torch ? 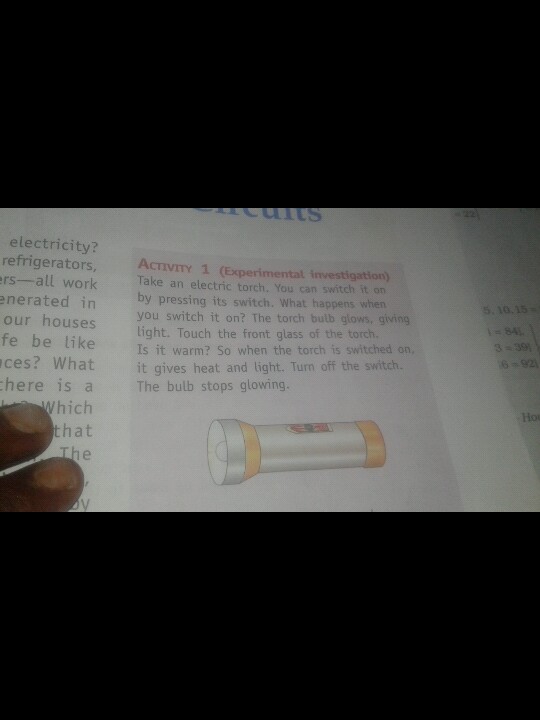 Electric torch has two battery, and springs a bulb and the !orror

Electric torch works on the flow of current from the electric cell to the bulb. This flow is broken or closed by a switch. Torch has basically five main parts that are a bulb coma reflector a cell switch and a glass covering.

The torch has two or three placed in cell in such a way that the opposite terminal touch each other.They are connected through a switch to a bulb.
When we 'on' the torch the metal strip "A" is push forward so, it touches metal "B and C" and the circuit is finished making the bulb glow.And, when the switch is "off' " the contact between metal strip "A and B " is broken and the bulb does not glow.

A torch bulb is comprised of two terminals and wire. The wire is a spirally coiled filament inside the bulb guarded by two thick conductors at its edges. Whenever the negative and the positive ends of an electronic cell are joined with the two termini of a bulb, current crosses through the filament and it begins gleaming. The termini of the bulb are attached in such a way that they do not encounter one other.

An electric torch works.?Electricity ?runs from the battery into the spring and metal connections into the bulb, the element heats up with the charge making it glow, the Lens and reflective cone emits out a beam,the switch connects or breaks the circuit

There are two main type of torch
1The torch made from a piece of clothes dipped in fuel and burns .
2The one with battery
Torch 1 is used in olden times
Torch 2 is more efficient than the torch 1 and also lasts tong

A torch is a practical example of a simple electric circuit. It is an electric device that emits light. It consists of a bulb, electric cells, a switch, a reflector, and a cylindrical shape casing.

Function of each component?of a torch

Electric cell:?The cell is an electricity-producing device. The required current for the filament of the bulb is supplied by it.

Switch:?The switch is used to complete and break the circuit inside the torch. In simple words, it is used to turn the torch on and off.

Electricity runs from the battery into the spring and metal connections into the bulb, the element heats up with the charge making it glow, the Lens and reflective cone emits out a beam,the switch connects or breaks the circuit.Give thumbs up 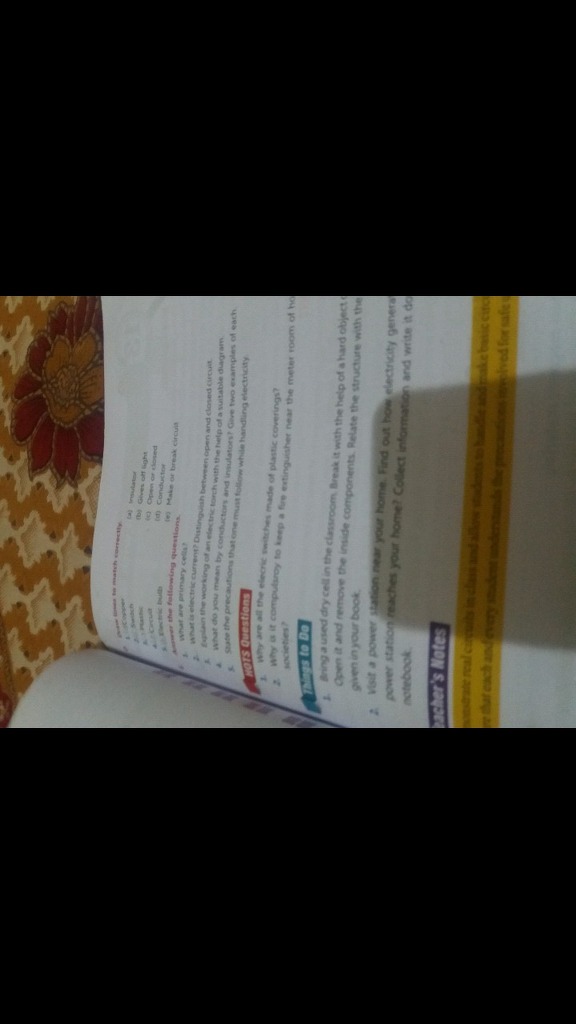 Electricity?runs from the battery into the spring and metal connections into the bulb, the element heats up with the charge making it glow, the Lens and reflective cone emits out a beam,the switch connects or breaks the circuit

An Electric torch is a small, portable lamp that gets its power from batteries. To understand how an electric torch work, we have to look at its parts and functions

Conclusion: The batteries send the electric current to the bulb through the metal spring and is either blocked by breaking the circuit or continues with the open circuit, which is the switch, and the bulb emits light and the rays are reflected by the reflector and is inside a transparent plastic or glass. 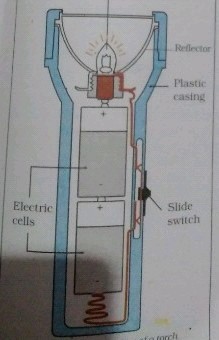 An electric torch ??works due to the presence of battery placed in it.The cell has chemicals?? filled in it ,so that the battery works.


I think this answer will be helpful to you friend!!??
What are you looking for?