How is secondary growth accomplished in dioct root

The yopic is well explaine din teh study material at http://cbse.meritnation.com/study-online/study-material/8bRtLxgLP@07QHkvF8airw!!/Z2xchULNsDlVdyLCxrTYeQ!!

Kindly go through the study material and get back to us for further doubts. 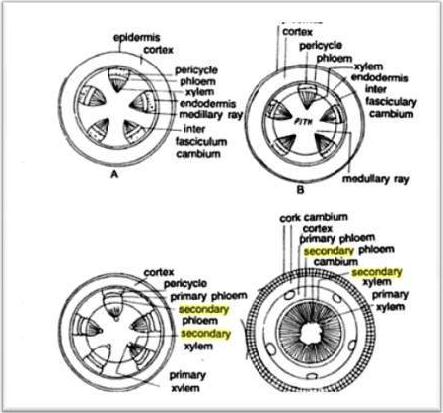 Dicot Stem: The growth in length of main axis by the activity of apical meristem is called primary growth. Increase in thickness or girth of the aixs due to the formation of secondary tissue is called secondary growth. The secondary tissue if formed by the activity of cambium and cork-cambium. The cambium forms secondary tissues in the stelar region and cork-cambium form secondary tissues into cortical regions. Secondary growht occurs only in dicot stem and root. It is usually absent in monocot root and stem.In dicot stem, secondary growth takes place through the following steps:a) Formation Of Cambium Ring: Formation of the cambium ring is the first step of secondary growth. The cambium of vascualr bundles becomes meristematic. At the same time some of the medullary ray cells lying at the level of cambium also become meristematic and form a strip of interfasciular cambium together with intrafasciular cambium form a complete circular ring, which is called cambium ring. The cambium ring forms the secondary tissues in the stelar region.The vascualr cambium consists of two types of cells, the fusiform initials and the ray initials. The fusiform initials are vertically oriented and divide to form the elements of xylem and phloem. The cells of ray initials are smaller and isidiametric which give rise to vascular rays of parenchymatous cells.b) Formation Of Secondary Vascualr Tissues: The cambium ring cuts off new cells,both on outer and inner sides. The new cells formed on the outerside gradually modify into the elements of secondary phloem. The cells formed on the inner side gradually modify into secondary xylem.Secondary Phloem: They consist of sieve tubes, companion cells, phloem parenchyma and phloem fibres. The primary phloem present on the outside gets crushed and is represented by small patches.Secondary Xylem: Secondary xylem consists of vessels, tracheids, wood fibres and wood parenchyma. The vessels or trachea are most abundant in secondary xylem and are usually shorter than that of the primary xylem. The cambium ring forms more tissue on the inner side than on the outer side. As a result, secondary xylem forms the main bulk of the plant body and is generally called the wood. Its width increases with age. The primary xylem persists as conical projections towards the pith.c) Vascualr rays: Ray initials of the cambium ring form some narrow bands of parenchymatous cells. These cells extend radially from the pith to the phloem. These are called secondary medullary rays or vascualr rays. The rays present in xylem are xylem rays and the rays present in phloem are called phloem rays.d) Annual rings: The activity of vascualr cambium is greatly affected by the variations in the climate. It is more pronounced in temperate regions. The cambium stops dividing in winter. In the spring season or early summer, the cambium becomes more active and produces a large number of vessels with wider lumen. These are called spring wood or early wood.During the autumn or winter season, the cambium becomes less active and produces vessels with narrow lumens. Tracheids and wood fibres are formed in large numbers. These woods are called autumn wood or late wood. Hence, the annual rings are formed year after year. In the oldest part of the tree, annual rings can be used in determing the age of a tree.In tropical regions, the climate is more or less uniform. Therefore, the annual rings are not well developed and does not correlate with the age of tree.e) Sapwood and Heartwood: 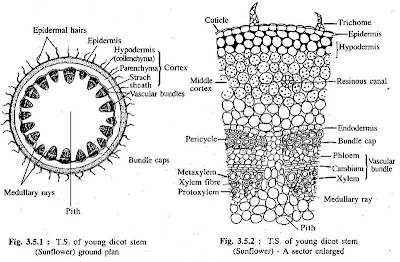 In older stems, the woody trunk is differentiated into two regions. The outer light coloured region is called sap wood or alburnum and central dark colored region is called heart wood or duramen. The cells of sapwood are living and functional. They take part in conduction of water and storage of food. The heartwood consists of dead cells. During the growth process, thr rings of sap wood gradually process, the rings os sap wood gradually convert into heartwood. The living ccells of sap wood lose their protoplast and water content. The lumen of the xylem vessels get blocked by the ingrowth of the parenchyma cells. The adjacent parenchyma tissue enetrs thorugh the pits of vessels and gradually enlarge to form a ballon like structure, which is called tyloses. The heartwood is stronger and more durable than sapwood. The heartwood becomes resistant to the attacks of bacteria and fungi due to the presence of antiseptic oils.