i dont get this part in Hybridisation "Involves mixing of onesorbital and twoporbitals to give threesp2orbitals"..Also please explain the hybridisation in BCL3

sp2 Hybridization (3 hybrid orbitals) :The s orbital is spherical in shape while p is dump bell . when they get mix to give the hybrid orbitals the resultant orbital have same shape and equivalent energy as represent by this diagram. Looking at the orbital diagram (g.s) for Boron in BCl3  we see three valence electrons.two in the 2s subshell and one in the 2p subshell.In order for Boron to form three covalent bonds it needs 3 unpaired electrons in three separate orbitals. So one of the 2s electron get excited to 2p orbital, 2s and 2p orbital of boron get hybridised to form 3 sp2 orbitals with one unpaird electron in each sp2 hybrid orbital.The diagram below is showing the formation of 3 sp2 hybrid orbitals in case of boron. 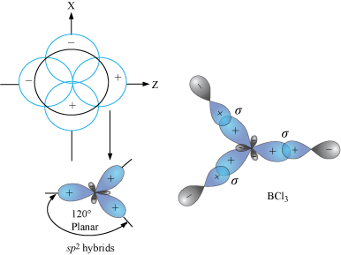