Is their any difference b/w Double Fertilization and Triple Fusion.

Please explain me meaning of both the words

During fertilization in plants, two pollen nuclei (male gametes) enter inside the ovule. In the ovule one male nucleus  fuses with the egg cell to form zygote called syngamy and other male gamete fuses with the two polar nuclei or secondary nuclei to form the triploid endosperm. As this involves fusion of three haploid nuclei (two polar nuclei and one male gamete), it is termed as triple fusion.  As the two types of the fusions, syngamy and triple fusion take place in an embryo sac, the phenomenon is  termed as double fertilization.

one male gamete fuses with the egg cell and other with fused nuclei of polar bodies is termed as double fertilization. it involves the fusion of 2 nucei

The pollen grains which reach the sticky stigma, absorb these secretions, swells up and ruptures at one of the germ pores. The thin intine emerges out in the form of a pollen tube which continues to grow and penetrates deep into the style.

(A - E), A, a microspore of an angiosperm;B E, stages in the germination of pollen grain anddevelopment of male gametophytes

Longitudinal section of a flower showing germination of pollen grains and the phenomenon of fertilization. One pollen tube has grown through the style and has entered the embryo sac through the micropyle

The pollen tube enters into the ovule, through the micropyle. Inside the embryo sac, the tip of the pollen tube ruptures and the 2 male gametes are set free near the egg apparatus. Inside the embryo sac, one of the 2 male gametes fuses with the egg nucleus and forms a diploid zygote. This process is called syngamy or true fertilisation. The other male gamete pushes further into the embryo sac and fuses with the secondary nucleus and gives rise to a triploid nucleus called the primary endosperm nucleus. This process of nuclear fusion is called triple fusion.

Longitudinal section of an ovule showing different stages of fertilisation

In the previous chapter, we looked at the broad classification of living organisms under the system proposed by Whittaker (1969) wherein he suggested the Five Kingdom classification viz. Monera, Protista, Fungi, Animalia and Plantae. In this chapter, we will deal in detail with further classification within Kingdom Plantae popularly known as the ‘plant kingdom’.

We must stress here that our understanding of the plant kingdom has changed over time. Fungi, and members of the Monera and Protista having cell walls have now been excluded from Plantae though earlier classifications put them in the same kingdom. So, the cyanobacteria that are also referred to as blue green algae are not ‘algae’ any more. In this chapter, we will describe Plantae under Algae, Bryophytes, Pteridophytes, Gymnosperms and Angiosperms.

Let us also look at classification within angiosperms to understand some of the concerns that influenced the classification systems. The earliest systems of classification used only gross superficial morphological characters such as habit, colour, number and shape of leaves, etc. They were based mainly on vegetative characters or on the androecium structure (system given by Linnaeus). Such systems were artificial; they separated the closely related species since they were based on a few characteristics. Also, the artificial systems gave equal weightage to vegetative and sexual characteristics; this is not acceptable since we know that often the vegetative characters are more easily affected by environment. As against this, natural classification systems developed, which were based on natural affinities among the organisms and consider, not only the external features, but also internal features, like ultra- structure, anatomy, embryology and phytochemistry. Such a classification for flowering plants was given by George Bentham and Joseph Dalton Hooker.

At present phylogenetic classification systems based on evolutionary relationships between the various organisms are acceptable. This assumes that organisms belonging to the same taxa have a common ancestor. We now use information from many other sources too to help resolve difficulties in classification. These become more important when there is no supporting fossil evidence. Numerical Taxonomy which is now easily carried out using computers is based on all observable characteristics. Number and codes are assigned to all the characters and the data are then processed. In this way each character is given equal importance and at the same time hundreds of characters can be considered. Cytotaxonomy that is based on cytological information like chromosome number, structure, behaviour and chemotaxonomy that uses the chemical constituents of the plant to resolve confusions, are also used by taxonomists these days.

double fertilisation is the process , in which two fusions, syngamy and triple fusion take place.

the fusion of the one male gamete with the egg which is contained in the embryo sac of the ovule is called syngamy and its product is the zygote. 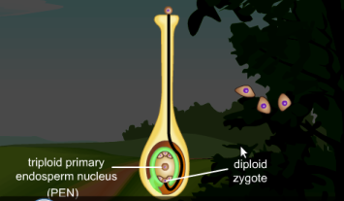