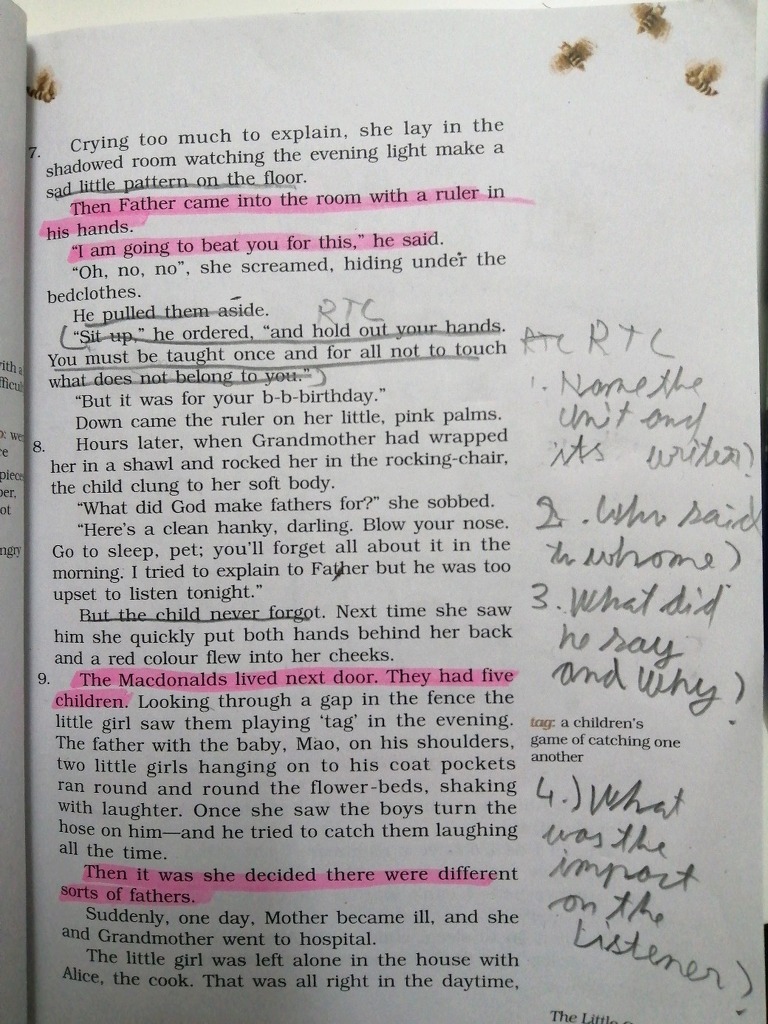 Meritnation exports as you can see that I have marked with the pencil the RTC which is reference to context please tell me the answer all my reference to context questions and this is NCERT English book beehive the little girl chapter name is Crying too much to explain, she lay in the shadowed room watching the evening light make a or. Father came into the _yyitn@rulerin his hands. 'I am going to beat you for this," he said. "Oh, no, no", she screamed, hiding undey the bedclothes. Yg_pulLed-ibem-Æide. You must be tau t once and for all n 'ithi "But it was for your b-b-birthday." Down came the ruler on her little. pink palms. 8. Hours later, when Grandmother had wrapped her in a shawl and rocked her in the rocking-chair, the child clung to her soft body. "What did God make fathers for?" she sobbed. "Here's a clean hanky, darling. Blow your nose. Go to sleep, pet; you'll forget all about it in the morning. I tried to explain to FaYler but he was too upset to listen tonight." BILL-.the-child-ue.ver—for.got. Next time she saw him she quickly put both hands behind her back 9. •The Macdonalds lived next door. They had five Children. Looking through a gap in the fence the little girl saw them playing 'tag' in the evening. The father with the baby, Mao, on his shoulders, two little girls hanging on to his coat pockets ran round and round the flower-beds, shaking With laughter. Once she saw the boys turn the hose on him—and he tried to catch them laughing (men it was she decided there were diffegent yorts of fathers. Suddenly, one day, Mother became ill, and she and Grandmother went to hospital. The little girl was left alone in the house with Alice, the cook. That was all right in the daytime, h' ha.R.4 tag: a children's game of catching one another

RTC
1.the unit is the little girl and the writer is Katherine Mansfield.
2.the little girl's father said this to the little girl kezia.
3.he told her to sit up and hold out her hand.he also said that she had to be taught a lesson for once to not touch things that did not belong to her.
he said that because he was angry and frustrated that kezia had destroyed his speech that he needed .he was over stressed with his work. he thought that she had to be taught a lesson so that she doesn't repeat the same thing again.
4.all this had a negative impact on the little girl. the girl found no trace of love from her father. she asked her grandmother what fathers were for. as according to her, fathers were not loving.  the little girl was frightened of her father.