This part of a speech refers to words that are used to name persons, things, animals, places, ideas, or events. Nouns are the simplest among the 8 parts of speech, which is why they are the first ones taught to students in primary school.

There are different types of nouns namely:

This great list of nouns can help you explore more nouns.

A pronoun is a part of a speech which functions as a replacement for a noun. Some examples of pronouns are: I, it, he, she, mine, his, hers, we, they, theirs, and ours.

This part of  a speech is used to describe a noun or a pronoun. Adjectives can specify the quality, the size, and the number of nouns or pronouns.

Use this link to get a list of adjectives.

This is the most important part of a speech, for without a verb, a sentence would not exist. Simply put, this is a word that shows an action (physical or mental) or state of being of the subject in a sentence.

Just like adjectives, adverbs are also used to describe words, but the difference is that adverbs describe adjectives, verbs, or another adverb.

The different types of adverbs are:

This part of a speech basically refers to words that specify location or a location in time.

Examples of Prepositions: above, below, throughout, outside, before, near, and since

The conjunction is a part of a speech which joins words, phrases, or clauses together.

Examples of Conjunctions:  and, yet, but, for, nor, or, and so

The italicized words in the sentences above are some examples of conjunctions.

This part of a speech refers to words which express emotions. Since interjections are commonly used to convey strong emotions, they are usually followed by an exclamation point. 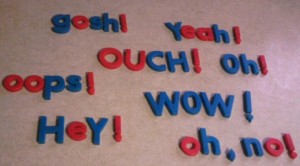