Please,explain me the energy band diagrams for n and p-type semiconductors? 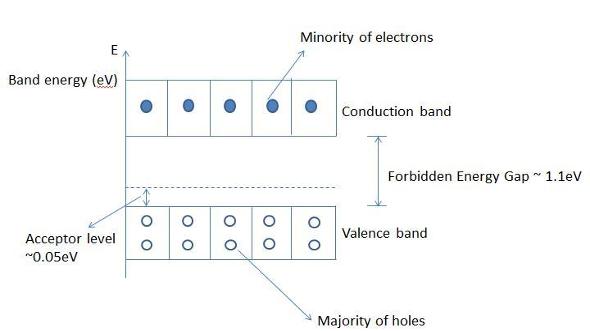 In a p-type semiconductor a trivalent impurity (lets say aluminium) is added to a silicon/germanium crystal which leaves an incomplete fourth aluminium bond. As aluminium has three valence electrons compared to four of Si/Ge we have excess of holes due to addition of trivalent impurity. So, in order to complete the firth bond the aluminium has to acquire an extra electron form the silicon atom, which make aluminium (and all trivalent impurities) atom an acceptor atom. The amount of energy required by the impurity atom is very small (acceptor level), around 0.05eV for Si and 0.01eV for Ge. Now, this electron transfer leaves a hole in silicon atom which is filled in by an nearby electron which also creates a hole in its place, which is further filled in. This process continues indefinitely and as a consequence of this recombination action many electrons from the conduction band fall into holes in the valence band. This leaves less of free electrons and more of holes. So, the majority charge carriers in p-type semiconductor are holes while minority charge carriers will be electrons. In an n-type semiconductor a pentavelent impurity (let's say arsenic) is added to a silicon/germanium which leaves a incomplete fifth arsenic bond. As arsenic has five valence electrons compared to four of Si/Ge we have an excess electrons due to the addition of this pentavalent impurity. Now rather than completing the band the excess electron in ejected from the impurity atom by applying small amount of energy, around 0.05eV for Si and 0.01eV for Ge. So, this makes the pentavalent impurity the donor atom. Now due to this the number of free electrons in the conduction band increases while only a small amount of holes remain in the valence band as a result of recombination process. Thus, as there are more electrons in an n-type semiconductor than holes we can say that electrons are majority charge carriers while holes are minority charge carriers.

electrons are already present in the conduction band.

and in d valence band electrons are present with a very few holes.