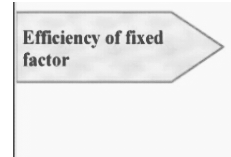 Dear Ujjwal,
the efficiency of fixed factor is an exception to the Law of variable proportion when it may happen that currently the fixed factors are not being utilised to their optimum capacity.
To understand this, recall the law. It states that the MP initially increases, then falls down in the second stage and then finally goes into negative as per the behaviour of TP.
However, if the MP falls initially and starts rising in the second stage, we can say that the law fails in such a case.
Now, look at the case of fixed factors. In case the fixed factors such as land or machinery is not being utilised efficiently in the initial stage then the MP will fall, however later when the fixed factors are utilised efficiently, the MP will rise. Thus, we can say that this is an exception to the law.

Hope this clears your doubt :)
In case of any other doubt, feel free to ask.
View Full Answer
What are you looking for?