Please provide me answer no 6 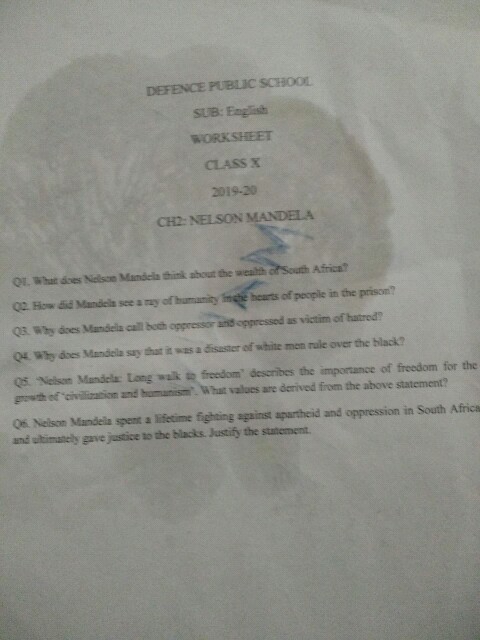 Apartheid was introduced in 1948 by the NP (National Party) which was an all-white government. It was a harsh system that gave little opportunities to non-white people and took away their basic human rights such as education, freedom of movement and rights to self-determination. Mandela joined the ANC (African National Congress) in 1944 and was elected President of the ANCYL (African National Congress Youth League) in 1951. He first encouraged non-violent protests as he wanted to follow Mahatma Ghandi?s example but this did not work and later on they used more violent tactics. The apartheid government then labeled Mandela and the other civil rights activists as terrorists.

Mandela was arrested by the apartheid government and during the Rivonia Trail (1963 -1964) and was sentenced to jail. He spent 27 years in jail, and most of that time was spent on Robben Island. During this time he had become an international symbol for the anti-Apartheid movement. Mandela and the anti-apartheid movement gained international support as there were worldwide protests and sanctions against the apartheid government


The fight against the apartheid government was a success due to both local and international pressure which forced the regime to end. On the 11 February 1990, F.W. de Klerk, who was South Africa?s president at that time, released Nelson Mandela from jail. Together they worked to end apartheid by abolishing apartheid laws, freeing civil rights protestors and unbanning political parties.

The 27 April 1994 was a historical day, when South Africa?s first democratic elections were held and everyone was given the right to vote regardless of their race. The ANC won the elections and Mandela, as its leader, became the first democratically elected president.

South Africa is now a fully democratic country. Mandela helped prevent a civil war and he ensured that no one would be discriminated because of the colour of their skin.


Since then all South Africa?s citizens? rights are protected by the new South African constitution based on human rights.

However, even though Apartheid no longer exists, the legacy of Apartheid can still be seen in South Africa today, especially in structural issues such as education and the distribution of labour.

Mandela stepped down as president in 1999 but continued to promote peace around the world. He also became involved with many charities for children and education.

HOPE THE ANSWER HELPS YOU......
View Full Answer
What are you looking for?