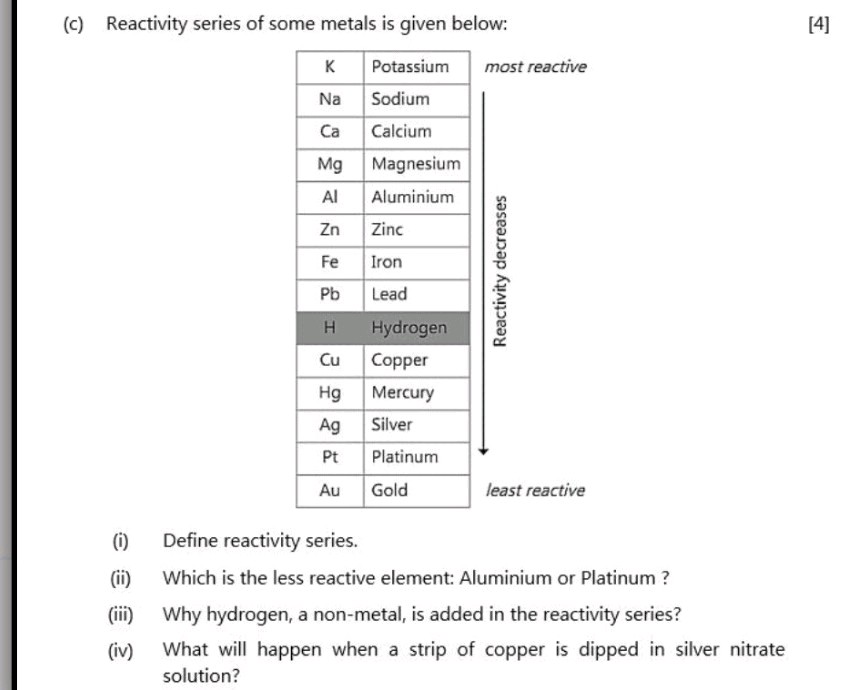 Dear student,
i) When elements are arranged in the increasing order of reduction potential with respect to hydrogen. The series obtained is called the reactivity series.
ii) Platinum is less reactive metal than Aluminium as platinum do not react with oxygen in the air, even if it is heated in Bunsen burner flame.
iii) Hydrogen is included in the reactivity series of the metals as it resembles alkali metals in some of its properties such as:
a) It loses an electron to form a positive ion.
b) It combines with non-metals which are electron attracting species.
c) During hydrolysis if any hydride hydrogen gas is liberated at the cathode.
d) It acts as a strong reducing agent.
The reactivity of hydrogen is taken as a reference to find the reactivity of other metals. Metals that are more reactive than hydrogen are placed above hydrogen and the metals that are less reactive than hydrogen are placed below hydrogen.
iv) When a strip of copper metal is placed in a solution of silver nitrate, copper being a more reactive element displaces silver from its nitrate solution and forms copper nitrate with silver being deposited on the copper strip.
2AgNO3 +Cu Cu(NO3)2 + 2Ag
Regards!

A.) Platinum is a less teactive metal.

Reactive*
What are you looking for?