Answer 3: Mukesh dreamt of becoming a motor mechanic. However, his family background and his financial status would never allow him to be one. His dream appears to be a distant one, a mirage sort and Mukesh has been compared to a traveller in the desert.

Answer 4: Rag picking is the means of survival for the ragpickers. According to the author, it is their "daily bread, a roof over their heads, even if it is a leaking roof". Thus, it is equivalent to gold for them. Besides, for the children it is "wrapped in wonder" for they, at times, chance upon "a rupee, even a ten-rupee note."

At first, he tried to overcome his fear of water on his own.  But when this failed, he got an instructor for himself who worked on Douglas’ fear very methodically. With his help, Douglas began by learning to be at ease in water. After this, he practiced exhaling-inhaling in water to eliminate the fear of putting his head inside the water. Then, he moved on to master individual steps of swimming which were, finally, integrated into a complete experience of swimming, by his instructor. After about six months, Douglas could not only swim well but was, also, free of his fear to a great extent.

At this stage, Douglas’ journey of truly overcoming his fear to its tiniest vestiges began. He swam alone in the pool. He went to Lake Wentworth to dive. He tried every possible stroke he learnt. Finally, in his diving expedition, in the Warm Lake, he conquered his fear completely.

To obtain assistance on the remaining queries, we would request you to kindly post them in separate threads.

Ans.4 the garbage is as gold to ragpickers coz they are totally dependent on those garbage dumbs...so whatever they found their a used in a way to live thier life....so garbage dumbs is stated as gold 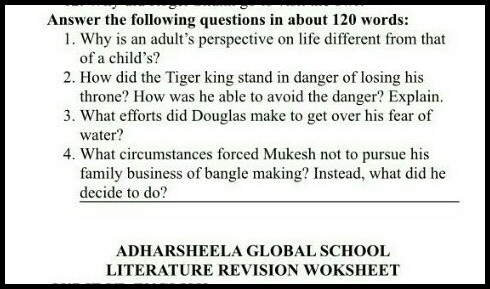 Ans3) Mukesh's dream is to drive a car one day and to be a successful people. We wanted to go school but his earnings could not favour him to do so. He could be a man of his destiny as he as a dream which he wanted to fulfill it anyhow by heart and has a curosity to fulfill his dreams
What are you looking for?