Q.E 1 study the diagram given below and then answer the questions that follow : 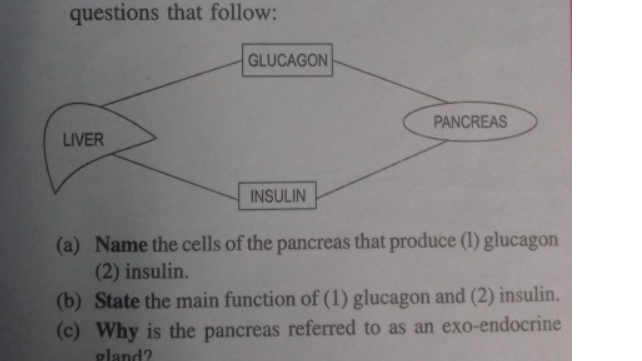 Dear Student,
(a)  1. Alpha cells
2. Beta cells
(b) 1. Increase blood sugar level
2. Lower blood sugar level and also storage of glucose in fat
(c)Digestive secretions are carried out by exocrine part of the pancreas .
Whereas islets of langerhans has four types of cells which secrete hormones like insulin ,glucagon ,somatostatin which gives the function of pancreas as an endocrine gland.

(d) If your body is not producing insulin, you must take it by injection or a pump to live. Insulin currently cannot be taken by mouth because the digestive juices in your stomach and intestine will break down the insulin before it has a chance to get into your bloodstream to do its job.

(e)The endocrine portion of the pancreas takes the form of many small clusters of cells called islets of Langerhans .

(f)The pancreas is an abdominal organ that is located behind the stomach and is surrounded by other organs, including the spleen, liver and small intestine.
Hope it helps
Regards

D. If insulin is given orally, it will be acted upon by various enzymes (pepsin) in the stomach thus insulin will be disintegrated and lose its effect.

F. Pancreas is located just below the stomach in the loop of duodenum.

a.)1.)alpha cells,2.)beta cells,b.)1.)glucagon enables the liver cells to absorb glycogen and convert it into glucose,2.)It converts glucose to glycogen whenever there is a rise in glucose level,d.)It is because if insulin will be given orally,it will get disintegrated and will thus lose its effect,c.)It is because it contains an exocrine cell- acini which secretes ducts and it is also an endocrine gland because it contains an endocrine cell-islet of Langerhans which secretes hormones by its alpha,beta ad delta cells respectively,e.)islet of Langerhans,f)Pancreas is located just below stomach in the loop of duodenum of small intestine. ​
What are you looking for?