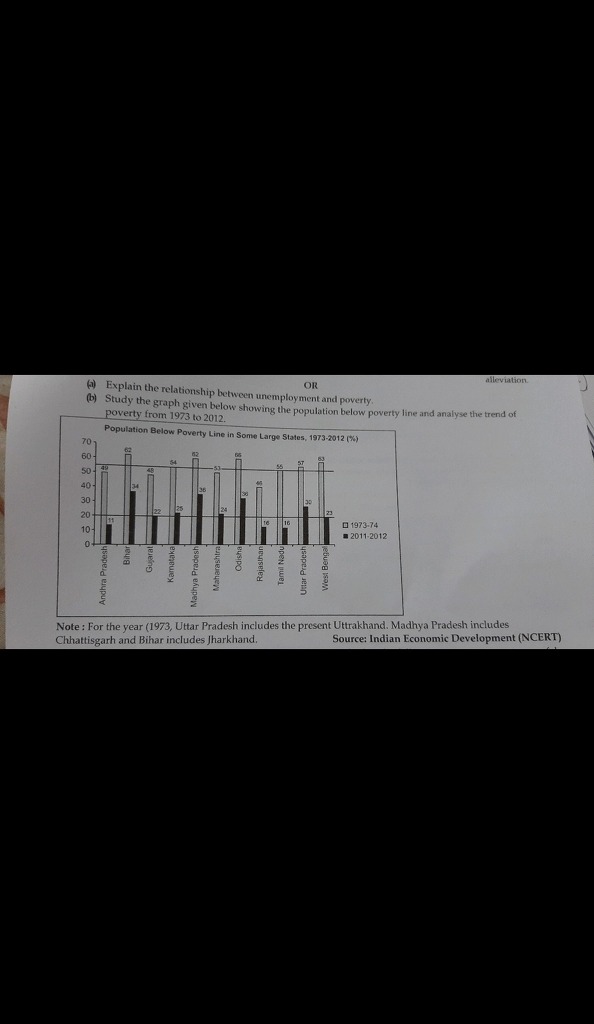 Dear Student,
(a) Unemployment leads to poverty and poverty in turn leads to unemployment.

An unemployed person has no means to earn money and cannot fulfill his own and his family’s basic needs. He and his family cannot avail quality education, medical facilities and has no means to create income-earning assets. Such circumstances often compel indebtedness. Consequently, an unemployed person exaggerates poverty for his family due to indebtedness. This confirms the positive relationship between unemployment and poverty.

If government wants to alleviate poverty, then it should aim at creating new employment opportunities. As a result, more people will get employed and perhaps their income will rise. This rise in income will improve their access to quality education, better health care and other basic amenities. Further, these newly employed people will experience appreciation in their living standards and can create income-earning assets. The combined result of all these factors leads to alleviation of poverty. Hence, there exists a positive (but a negative) relationship between unemployment (employment) and poverty.

(b) The two lines in the graph indicate the national poverty level. The first line from below indicates poverty level during 2011-12 and the other line indicates the same for the year 1973-74. This analyse the proportion of poor in India during 1973-2012 has come down from 55 to 22 %. The graph also reveals that six states - Tamil Nadu, Uttar Pradesh, Bihar, Madhya Pradesh, West Bengal and Orissa - contained a large section of poor in 1973-74. During 1973- 2012, many Indian states reduced the poverty levels to a considerable extent. Yet, the poverty levels in four states - Odisha, Madhya Pradesh, Bihar and Uttar Pradesh are still far above the national poverty level.