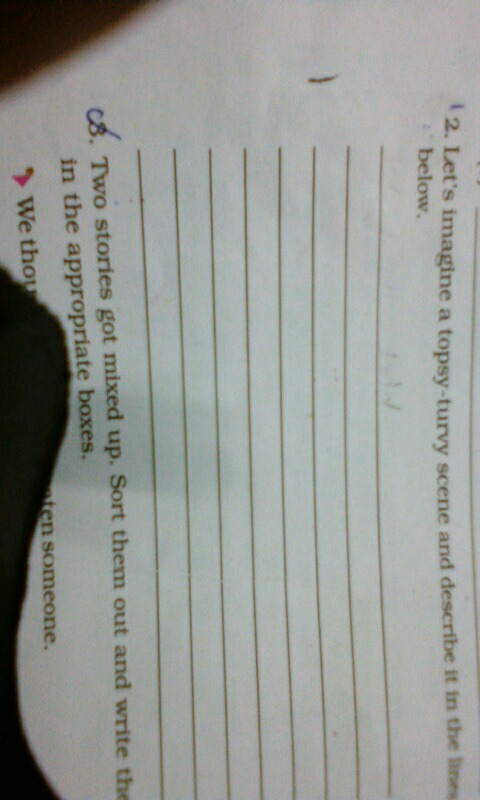 Solve this: 'Vaa about one lard people walk upon their heads. Sea is made of sand. children go to school by night. In Topsy •turvy Land. front-door step is at the back. You're Walking when you stand. You wear your hat upon your feet. In Topsy-turvy land. And buses on the sea you'll meet. While pleasure boats are planned. TO travel up and down the streets Of TopsyAurvy Land. You pay for what you never get. I think it must be grand. For when you go you re conung back. In Topsy-t'.uvy Land.

Such questions are meant to test your writing skills and should be attempted on your own. However, these points might help you elaborate:

Dear student, it is a little unclear if you want the same scene as given in the poem to be described or a completely new one(both are imaginary). Giving points for both:
- In the given poem, a topsy turvy or upside down land is described.
- Schools are held at night and people walk on their heads there.
- The sea is made of sand, not water.
- Boats run up and down the street and buses on the sea.
- You do not get things that you pay for there.

A different kind of topsy turvy land:
- Children teach and adults study in schools.
- Children manage the offices and the government portfolios in the topsy turvy land.
- To be able to vote, one must not be older than eighteen years.
- Fruits grow on roots of plants and branches are watered!
- One can see the fish flying and the birds swimming.

Which question?
What are you looking for?