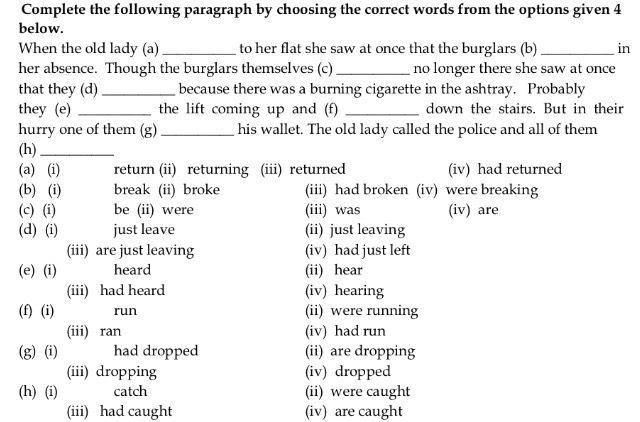 Solve this: below. When the old lady (a) Complete the following paragraph by choosing the correct words from the options given 4 (iii) ran to her flat she saw at once that the burglars (b) her absence. Though the burglars themselves (c) no longer there she saw at once that they (d) they (e) hurry one of them (g) because there was a burning cigarette in the ashtray. Probably the lift coming up and (f) down the stairs. But in their his wallet. The old lady called the police and all of them (h) (a) (i) (iii) (iii) (iii) (iii) return (ii) returning (iii) returned (iv) had returned break (ii) broke be (ii) were just leave are just leaving heard had heard had dropped dropping catch had caught (iii) had broken (iv) were breaking (iii) was (ii) just leaving (iv) had just left (ii) hear (iv) hearing (ii) were running (iv) had run (ii) are dropplng (iv) dropped (il) were ca (iv) are caught (iv) are