summary of on the face of it

It ate my face up.it ate me up.who said these world?why?

The play is about the friendship between an old man, Mr Lamb, and a young boy, Derry, who is withdrawn and defiant. The child is very disturbed because of his scarred face and feels that people do not want to associate with him. He drifts into Mr Lamb?s garden which looks very inviting but Derry panics when he meets the old man. The latter tries to make him feel at ease and advises him to accept life as it comes. Mr Lamb?s philosophy is to celebrate life in all its forms. To him, the difference is a part of life ? a flower and a weed are the same, both signs of life, of growth. Having an artificial or a ?tin leg?, he has had to cope with the cruelty of others but has taken it in his stride. He has a positive and optimistic attitude to life. He tells Derry to live life to the full and to avoid bitterness which can be more destructive than the acid that destroyed his face. He advises Derry to accept life without any pre-conceived notions. The power of choosing what one wants lies in one?s hands. Derry is extremely sensitive about his scarred face and has a fixed opinion that he is repulsive and ugly. He locks himself in a world of his own and avoids contact with others. But inspite of his attitude, he is moved by the old man?s spirit. This is evident from the fact that he defies his mother and returns to the garden, though sadly a little too late. Derry? s face is scarred while Mr Lamb?s leg is an artificial one, a tin leg? as he calls it. Both have to cope with the cruelty of others. While Derry withdraws into his shell, Mr Lamb takes it into his stride. One gets glimpses of the loneliness the old man faces in spite of his outward bravado in the scene when he talks to the bees. From Derry? s point of view also it is sad that when he finally makes an effort to come out of his shell, he is confronted by the loss of the only person who had befriended him. 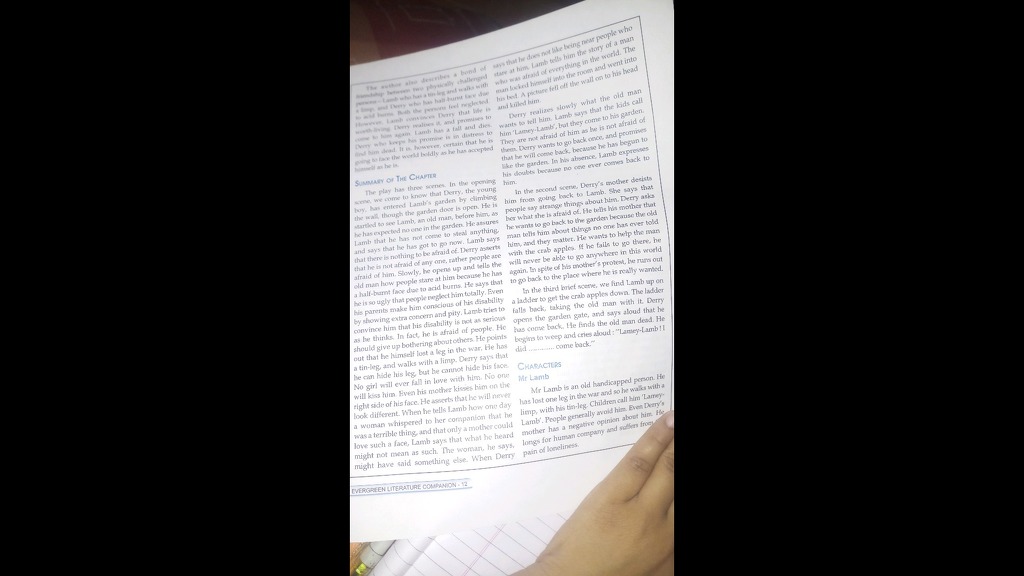 In this story.. there is a boy,Derry who has a scar on on side of his face due to which he thinks people pity him and are scared of him. He is introvert and does not enjoy his life .... he does not like the place where many people are around. One day, he saw a garden beside a house which he thought was empty. He liked to be alone and he wanted to go to that garden. But to his suprise there was an old man, Mr. Lamb was a former army veteran and lost his one leg in one of the wars. Mr lamb tried to befriend Derry who was not comfortable with someone around him. He thought that mr lamb is just sympathetic towards him and is scared due to which he is acting so friendly so that derry doesn't harm him. They both talked, had arguments, and in every conversation we can see that Mr lamb was positive optimistic that he was always pessimist and he always was ready to find something bitter in mister alarms sentence but eventually Mr lamb was able to transform derry's Pessimistic behaviour and to optimistic one. As we can see for the year in the chapter diary was saying that he want to go back to home to tell his mother that he is here when Mr lamb questioned him and suspected that he won't come back because he knew that any office previous friends never came back so he thought that he was the same but diary acknowledged that he would come back and he left while he was going to his home Mr lamb was singing and mermaid two to himself that he won't come back none of my friends came so why would you come and he tried to pick some apples from history meanwhile that we went to his home and told his mother about Mr lamb is momm disapproved his friendship with Mr lamb as he she and she knew about Mr lamb very well and she had known like she has heard many stories about him so he she doesn't wanted that to talk with Mr lamb much but there was stubborn and he said no I will go because no one has told me something which I wanted to listen but accept Islam so I will go no matter how much you disapprove about it so his mum was very curious but still he left the home and run towards mis alarms home when Mr Ram was plucking his apples the diary came there he saw him and he was like mermaid that Mr lamb C I came back and when he so lucky so Mr lamb he was lying on the the lying on the floor that Rush towards Ham and ask him to get up please come on you can do it like that stuff and he was crying because he knew that Mr lamb was that this was because when Mr lamb was plucking his apples he lost his balance and he fall due to which he died so this is the summary and I hope you like it if you like it thank you
What are you looking for?