Tell the answer as soon as possible

Temporary hardness : It is due to the presence of soluble bicarbonates of calcium and magnesium. It can be removed by following methods:

(i) Boiling: During boiling, the soluble Mg(HCO3)2 present in water is converted into insoluble Mg(OH)2 and Ca(HCO3)2 is changed to insoluble CaCO3  which settle at the bottom as precipitates. These precipitates can be removed by filtration. Filtrate thus obtained will be soft water.

(ii)Calcium hydroxide or Clark’ method: In this method calculated amount of lime is added to hard water. It precipitates out calcium carbonate and magnesium hydroxide which can be filtered off.

Permanent hardness: It is due to the presence of chlorides and sulphates of calcium and magnesium. It can be removed by following methods:

Ion exchange method: This is a modern method of softening of water. In this method, the ions present in the hard water are exchanged for less damaging ions from the exchangers. There are two main type of ion-exchangers as:

(i)Inorganic cation exchangers (Permuitit method): This is a modern method employed for the softening of hard water. hydrated sodium aluminium silicate (Na2Al2Si2O8.xH2O) is called permutit. These complex salts are also known as zeolites.

The process of softening of water is carried in a tall cylindrical vesse packed with coarse sand (or gravel) and permuitit. Hard water is introduced through an inlet. It first reaches the bottom of the vessel. As it rises up, the suspended inpurities are removed by gravel. It then comes in contact with permuitit which exchanges Ca2+ and Mg2+ ions present in tank water with Na+ ions.The water that rises through permuitit layer is free from Ca2+ and Mg2+ ions and is therefore, soft.It can be taken out from outlet.

Regeneration of Permuitit: After sometime, the entire Na2Z gets converted into CaZ

In this process, hard water is first introduced from the top of the tank packed with gravel and cation exchange resin (H+-resin). As it cmes in contact with the resin, Ca2+ and Mg2+ ions are exchanged with H+ ions of the resin as follows:

Water that escapes from the tank is free from cations causing the hardness of water. It contains

H+, Cl-, SO42- ions. It is then introduced in another tank packed with the anion exchange resin   (OH--resin). The anions Cl- , SO42- ions causing the hardness of water are exchanged by the OH- ions of the resin as follows:

The H+ ions coming from the cation resin tank combine with OH- ions to form H2O. Thus, the water coming out of the tank is free from all types of ions causing the hardness of water.

Regeneration of resins: The exhausted resin in the first tank is regenerated by treatment with moderately concentrated hydrochloric or sulphuric acid.

Similarly, the exhausted resin in the second tank is regenerated by treatment with moderately concentrated solution of sodium hydroxide. 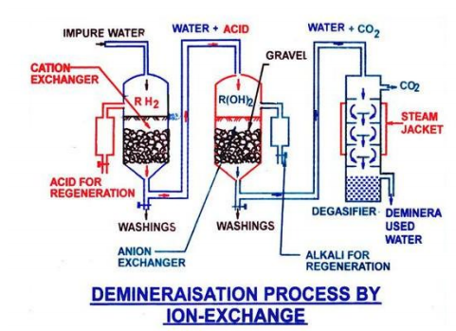