a) Where is its circumcentre located?

c) What is theratio of the sum of the central angles of the shorter arcs and the cental angle of the longest arc? 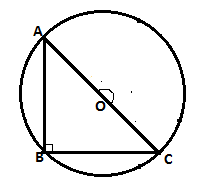