what are perpendicular lines

Lines which intersect to form a right angle (90°) are known as perpendicular lines. When two or more lines meat at a point and form a right angle they are known as Perpendicular. 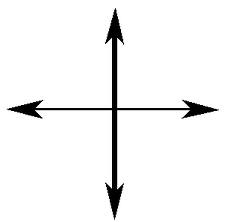 When two or more lines meat at a point and form a right angle they are known as Perpendicular.

PERPEDICULAR LINES FORM a 90 DEGREE ANGLE AT EACH SIDE :D

In geometry, two lines or planes (or a line and a plane) are considered perpendicular (or orthogonal) to each other if they form congruent adjacent angles (a T-shape). The term may be used as a noun or adjective. Thus, as illustrated, the line AB is the perpendicular to CD through the point A.

In a coordinate plane, perpendicular lines have opposite reciprocal slopes. A horizontal line has slope equal to zero while the slope of a vertical line is described as undefined or sometimes ±infinity. Two lines that are perpendicular would be denoted as AB

perpendicular - a straight line at right angles to another line

straight line - a line traced by a point traveling in a constant direction; a line of zero curvature; "the shortest distance between two points is a straight line"

perpendicular - a Gothic style in 14th and 15th century England; characterized by vertical lines and a four-centered (Tudor) arch and fan vaulting

perpendicular - a cord from which a metal weight is suspended pointing directly to the earth's center of gravity; used to determine the vertical from a given point

plumb line
cord - a line made of twisted fibers or threads; "the bundle was tied with a cord"
lead line, sounding line - (nautical) plumb line for determining depth
plumb, plumb bob, plummet - the metal bob of a plumb line
plumb rule - a plumb line attached to a narrow board

face - a vertical surface of a building or cliff

oblique - slanting or inclined in direction or course or position--neither parallel nor perpendicular nor right-angled; "the oblique rays of the winter sun"; "acute and obtuse angles are oblique angles"; "the axis of an oblique cone is not perpendicular to its base"
parallel - being everywhere equidistant and not intersecting; "parallel lines never converge"; "concentric circles are parallel"; "dancers in two parallel rows"

perpendicular - at right angles to the plane of the horizon or a base line; "a vertical camera angle"; "the monument consists of two vertical pillars supporting a horizontal slab"; "measure the perpendicular height"

steep - having a sharp inclination; "the steep attic stairs"; "steep cliffs"
What are you looking for?