What are the differences between concave and convex lens?

Concave lens always form the virtual and erect image and the image is always diminished. While convex lens forms real image as well as virtual image . It forms both enlarged image and the diminished image.

Concave lens are converging lens.They are used to correct shortsightedness.

Convex lens are diverging lens.They are used to correct longsightedness.

A concave lens is thinnest in its middle (the point where the line between the two focal points intersects the lens (at right angles to the plane of the lens).

A convex lens is thickest in its middle.

A convexo-concave lens is concave on one side and convex on the other. Virtually all spectacle (eye glasses) lenses are like this. Whether the particular lens is convex or concave is answered by the thickness at it middle compared with elsewhere on the lens.

You can also consider all the combos: single (the other side is flat), double convex and concave.

Then, if you really wanted to know some of the PROPERTIES of these lenses, then you get a number characteristic differences - let us now, and someone will elaborate

The convex lens always refract 's light in toward 's the center point Convex like a earth
concave is opposite earth..... hope it helps....... thumbs up plzz..... 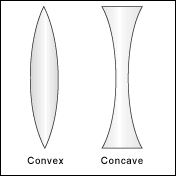 The differences between real and virtual images are,

Concave:
A. It is thicker at edges and thinner at middle.
B. It diverges Rays of light
C. It always forms virtual and erect image.
D. It forms diminished image.

Convex lens:
A. It is thicker in the middle and thinner at sides.
B. It converges the rays of light
C. It generally forms real and inverted image.
D. It forms magnified image.

Note- Point D is true only when the object is placed between the focus and the centre of the lens and will form virtual and erect image only.
What are you looking for?