what is alcoholism? describe the ill effects of alcohol on different parts of the body of an indivisual?

Alcoholism is a broad term for problems with alcohol, and is generally used to mean compulsive and uncontrolled consumption of alcoholic beverages, usually to the detriment of the drinker's health, personal relationships, and social standing. 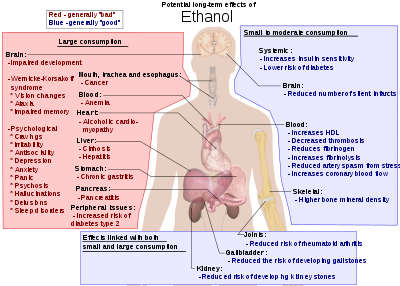 Some of the possible long-term effects of ethanol an individual may develop. Additionally, in pregnant women, alcohol can cause fetal alcohol syndrome.

Alcoholism is characterised by an increased tolerance of and physical dependence on alcohol, affecting an individual's ability to control alcohol consumption safely. These characteristics are believed to play a role in impeding an alcoholic's ability to stop drinking.[10] Alcoholism can have adverse effects on mental health, causing psychiatric disorders and increasing the risk of suicide. The onset of depression is a common symptom.[21][22]

The National Institute on Alcohol Abuse and Alcoholism defines binge drinking as the amount of alcohol leading to a blood alcohol content (BAC) of 0.08, which, for most adults, would be reached by consuming five drinks for men or four for women over a 2-hour period.

Long-term alcohol abuse can cause a number of physical symptoms, including cirrhosis of the liver, pancreatitis, epilepsy, polyneuropathy, alcoholic dementia, heart disease, nutritional deficiencies, peptic ulcers[24] and sexual dysfunction, and can eventually be fatal. Other physical effects include an increased risk of developing cardiovascular disease, malabsorption, alcoholic liver disease, and cancer. Damage to the central nervous system and peripheral nervous system can occur from sustained alcohol consumption.[25][26] A wide range of immunologic defects can result and there may be a generalized skeletal fragility, in addition to a recognized tendency to accidental injury, resulting a propensity to bone fractures.[27]

Women develop long-term complications of alcohol dependence more rapidly than do men. Additionally, women have a higher mortality rate from alcoholism than men.[28] Examples of long-term complications include brain, heart, and liver damage[29] and an increased risk of breast cancer. Additionally, heavy drinking over time has been found to have a negative effect on reproductive functioning in women. This results in reproductive dysfunction such as anovulation, decreased ovarian mass, problems or irregularity of the menstrual cycle, and early menopause.[28] Alcoholic ketoacidosis can occur in individuals who chronically abuse alcohol and have a recent history of binge drinking.[30][31]

Long-term misuse of alcohol can cause a wide range of mental health problems. Severe cognitive problems are common; approximately 10 percent of all dementia cases are related to alcohol consumption, making it the second leading cause of dementia.[32] Excessive alcohol use causes damage to brain function, and psychological health can be increasingly affected over time.[33]

Social skills are significantly impaired in people suffering from alcoholism due to the neurotoxic effects of alcohol on the brain, especially the prefrontal cortex area of the brain. The social skills that are impaired by alcohol abuse include impairments in perceiving facial emotions, prosody perception problems and theory of mind deficits; the ability to understand humour is also impaired in alcohol abusers.[34]

Psychiatric disorders are common in alcoholics, with as many as 25 percent suffering severe psychiatric disturbances. The most prevalent psychiatric symptoms are anxiety and depression disorders. Psychiatric symptoms usually initially worsen during alcohol withdrawal, but typically improve or disappear with continued abstinence.[35] Psychosis, confusion, and organic brain syndrome may be caused by alcohol misuse, which can lead to a misdiagnosis such as schizophrenia.[36] Panic disorder can develop or worsen as a direct result of long-term alcohol misuse.[37][38]

The co-occurrence of major depressive disorder and alcoholism is well documented.[39][40][41] Among those with comorbid occurrences, a distinction is commonly made between depressive episodes that remit with alcohol abstinence ("substance-induced"), and depressive episodes that are primary and do not remit with abstinence ("independent" episodes).[42][43][44] Additional use of other drugs may increase the risk of depression.[45]

Psychiatric disorders differ depending on gender. Women who have alcohol-use disorders often have a co-occurring psychiatric diagnosis such as major depression, anxiety, panic disorder, bulimia, post-traumatic stress disorder (PTSD), or borderline personality disorder. Men with alcohol-use disorders more often have a co-occurring diagnosis of narcissistic or antisocial personality disorder, bipolar disorder, schizophrenia, impulse disorders or attention deficit/hyperactivity disorder.[46] Women with alcoholism are more likely to have a history of physical or sexual assault, abuse and domestic violence than those in the general population,[46] which can lead to higher instances of psychiatric disorders and greater dependence on alcohol.

The social problems arising from alcoholism are serious, caused by the pathological changes in the brain and the intoxicating effects of alcohol.[32][47] Alcohol abuse is associated with an increased risk of committing criminal offences, including child abuse, domestic violence, rape, burglary and assault.[48] Alcoholism is associated with loss of employment,[49] which can lead to financial problems. Drinking at inappropriate times, and behavior caused by reduced judgment, can lead to legal consequences, such as criminal charges for drunk driving[50] or public disorder, or civil penalties for tortious behavior, and may lead to a criminal sentence.

An alcoholic's behavior and mental impairment, while drunk, can profoundly affect those surrounding them and lead to isolation from family and friends. This isolation can lead to

. Alcoholism can also lead to

, with subsequent lasting damage to the emotional development of the alcoholic's children.

For this reason, children of alcoholic parents can develop a number of emotional problems. For example, they can become afraid of their parents, because of their unstable mood behaviors. In addition, they can develop considerable amount of shame over their inadequacy to liberate their parents from alcoholism. As a result of this failure, they develop wretched self-images, which can lead to depression.

how to identfy the alcohal  & drugs
effects
What are you looking for?