The answer posted by isha.. is correct.

For more information on congruency rules, you can go through the content of chapter 7, lessons 2 to 6.

see asa means side angle side

sas means side angle side

We use several criteria to prove two triangles to be congruent. The most common criterion is the Side-Side-Side (SSS) congruency criterion and is applied when we know all the sides of the two triangles.

Is the following pair of triangles congruent?

Therefore, ΔABC and ΔPQR are not congruent triangles.

In the following figure,

and D is the mid-point of BC.

(Given D is the mid-point of BC)

Consider the two triangles, ΔDEF and ΔXYZ, as shown in the following figure.

Now, consider the following triangles where in ΔABC, 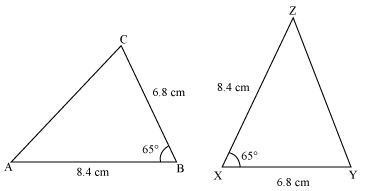 Therefore, according to SAS congruence criterion,

Which of the following pairs of triangles are congruent?

The included angle between

is ∠B, and the included angle between

Thus, the included angle between the two sides is not same.

Therefore, ΔABC and ΔDEF are not congruent.

The angle included between

is ∠C, and the angle included between

Therefore, according to SAS congruence criterion, we can say that ΔABC and ΔLMN are congruent.

Example 2: In the figure shown here,