SUBLIMATION IS A CHEMICAL PROCESS WHERE A SOLID TURNS INTO A GAS WITHOUT GOING THROUGH A LIQUID STAGE .

The process by which a solid when heated ,directly changes into its vapour without first changing into liquid .This process is called Sublimation

When anything solid turns into a gas without first becoming liquid, that's sublimation. When the surface layer of snow or ice turns into fog or steam without melting, this is an example of sublimation. The noun sublimation is from the Latin word sublimare, meaning “to raise a higher status.”

The process of conversion of gas into solid is called sublimation EXAMPLES:camphor 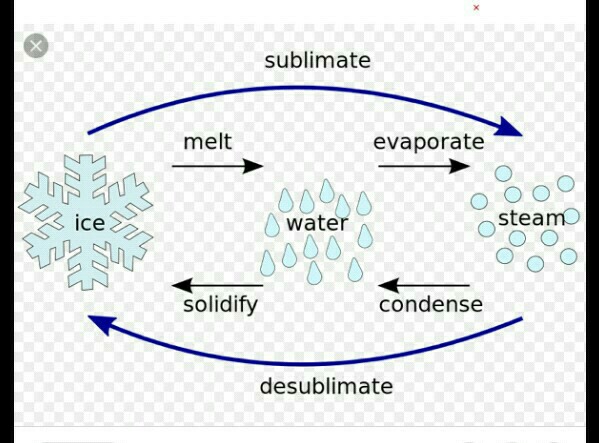 Sublimation is the transition of a substance directly from the solid to the gas phase, without passing through the intermediate liquid phase. Sublimation is an endothermic process that occurs at temperatures and pressures below a substance's triple point in its phase diagram, which corresponds to the lowest pressure at which the substance can exist as a liquid. The reverse process of sublimation is deposition or desublimation, in which a substance passes directly from a gas to a solid phase. Sublimation has also been used as a generic term to describe a solid-to-gas transition (sublimation) followed by a gas-to-solid transition (deposition). While a transition from liquid to gas is described as evaporation if it occurs below the boiling point of the liquid, and as boiling if it occurs at the boiling point, there is no such distinction within the solid-to-gas transition, which is always described as sublimation.

Sublimation is the process by which solid get directed changes into gases state
What are you looking for?